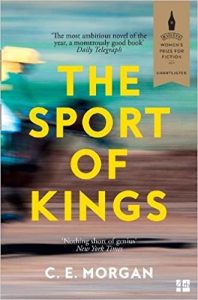 At first, C. E. Morgan’s The Sport of Kings appears to be yet another generational story about a wealthy family living in the American South. It soon becomes clear, however, that the novel is so much more than that. As the story unfolds, Morgan bluntly tackles racism, poverty, rape, obsession, and incest. For those with a more factual curiosity, it also includes interesting passages on Darwinism, geology, and horse husbandry.

One of the main characters, Henry Forge, can trace his ancestry back to just after the Revolution, when his pioneering family first settled on their Kentucky farm.

Retaining the supremacist ethos of his slave-owning ancestors, Henry’s father was a racist tyrant determined to ensure the continuation of the Forge dynasty and maintain their family traditions, but Henry had different ideas.  Immediately upon inheriting the family farm, and in defiance of everything his father valued, Henry turned the land into a racehorse breeding stable to realise his obsessive dream of breeding, and indeed inbreeding racehorses to produce the perfect thoroughbred.

Like his father, Henry, infused with the same bigotry, chose to instil their family values in his child, Henrietta, grooming her from an early age to follow in his footsteps.

In tandem with the Forges’ story is one of Allmon Shaughnessy, a, black Cincinnatian child born into abject poverty.  There is a damning portrayal of the US health care system which leaves his mother sick and in pain with no recourse to treatment.  Her issues of unrequited love, Allmon’s white father having abandoned them, and ill-health leaves little room in her life to nurture her son.  To get cash to help his mother, Allmon falls in with a local drug dealer and eventually winds up in jail.  It is there where he is trained to be a horse groom and, after release, ends up working on the Forge farm.

Henrietta and Allmon begin an affair which, without wanting to give too much away, leads to all manner of complications.  This is all happening before a backdrop of a perfect foal being born and trained to become a winner.

Like any good horse race, this book starts off at a slower pace then, after several unexpected turns and an increase of pace, it hurtles to a finish that no-one could safely predict from the start.  At its core it is a story about inheritance, not simply of land and money, but of ancestry and breeding, both in humans and horses. In the process, it deals with the problems of being born into both privilege and poverty.

It is not an easy read as Morgan, without fanfare, tackles taboo topics which often caught me off guard. However, I found none of the violence, or other distasteful matters, to be unnecessary as they all fed into enriching my understanding of the complicated characters.  It is also a lengthy read, and I can appreciate that some may consider it to be too long when potentially it could have been truncated by cutting out some of the prolonged monologues of minor characters.  Indeed, some may find it unnecessarily wordy and the language to be somewhat pretentious, but personally I relished the flowery language and savoured the elongated descriptions in this epic tale and could not wait for it to unfold, with many surprises en route.

In addition to being shortlisted for the Baileys, The Sport of Kings, which is Morgan’s second novel, has also reached the shortlist for the Rathbones Folio Prize, James Tait Black Fiction Prize, Pulitzer Prize for Fiction and has won the Kirkus Fiction Prize.  With a pedigree like this, if I were a betting person, my money would be on this novel to beat the field in the Baileys Prize in addition to reaching our screens as a movie or mini-series very shortly.