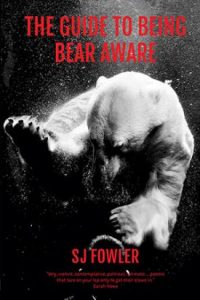 SJ Fowler’s The Guide To Being Bear Aware is a paradigm for reflecting in a world gone awry. It is a collection with raw, political edge. Wittily, through a play-on-words, The Guide To Being Bear Aware strips the self bare, forcing the reader to acknowledge who they were before the influence of globalization and attendant social pressures. “Ghosts in the basement” reads.

For here we are, outside
lucky to be alive.
But people always find a way to ruin it,
getting used to whatever they’ve got within minutes of having it.

As each poem progresses, Fowler delves into the process of adaptation and growth in the midst of a twisting, often terrifying, world that dominates the self with unanswerable questions. Here, unusually perhaps, the poet focuses on observations rather than on finding solutions. “The best years of your life” reminds readers that “intelligence is the reason [they’re] confused.” In “You’re basic larva,” he expounds:

The standard
of understanding
matters
is knowing
all that is
will be
not.

Here, Fowler seems to suggest that there is more to the self than the comprehensible. First person narratives enable the poet to explore self in its purest form. The collection emphasizes both  the innocent and hypocritical sides of human responses and relationships. Each poem is preceded by an epigraph: “Doing coke on the treadmill” is no exception. In response to a F. E. D. Schleiermacher quote, the poem reads:

Nothing particular or significant
behind the eyes,
rather that which meets the optic
in the world
finishes off the
experience
to make it something conscious.

The Guide To Being Bear Aware dissects the self, searching out the subliminal. Towards the end of the collection, Fowler chooses “you,” and even later, “the sloth” to uncover more facets. In “Bribe track”: “You remind me of my brother […] and continues with both observations and facts, combining phrases such as “You are a […]” with what “You enjoy,” “offer,” and “have.” Similarly, “the sloth” is more than an animal; Fowler connects who the sloth is with what he does, whether on purpose or instinctively.

Fowler also questions how the effects of momentum and time alter ones conscious experiences.

Meanwhile,
I have had to time to reflect,
[…]
I ask, not for the first time,
make us chase.

The Guide To Being Bear Aware is about chasing the uninhibited, unrestricted self down the road to where “the real action is / Not in nature / but in wires,” through “the nervous system of human communication.” While the poetry focuses on how human interaction has evolved in the midst of prejudice and power-struggles, it also encourages personal connection—a heart-connection where “versions of emotions” are simplified, right down to the stark and universal.

“Stay out of this Max,” deserves significant attention, being inspired by Clemens Schittko’s statement “I don’t want to know about myself”. With profound clarity, it paraphrases the rut of relationships:

I say you can say what you want in the subtext, but not the text […]
The main issue after all is not telling other people how to think.
And you cannot tell how they take what you say anyway, I say. You agree.
In this place provocative is a misused word for intensity
by those scared of being hurt and so hurt others
It’s as if intensity is directed at an internal soft civil war.

This poem embodies the collection’s themes—openness, truth, and vulnerability. It addresses our internal being, the part of us—the creature inside—we try to suppress.

Although some of the collection’s lyricism and poetic phrasing might seem undermined by its overarching narratives, it is evident that Fowler keeps a steady, poignant grip on the balance of his style. The Guide To Being Bear Aware is an intricate, intimate read that demands, and definitely deserves, the intrigue of its readers.