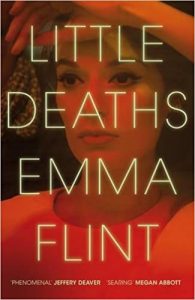 “Ruth Malone is enthralling, challenging and secretive – is she really capable of murder?” – Little Deaths synopsis.

The characters of a promiscuous mother and a struggling journalist are the protagonists entangled in the story of the horrifying murders of two children: Little Deaths is the debut novel from Emma Flint. From an early age, Flint has been invested in true crime stories, and Little Deaths draws its inspiration from the real-life case of Alice Crimmins, a woman charged with the strangulation of her two children. The book follows the story of a woman judged for the life she leads, rather than for the crime which she is believed to have committed. Flint’s story carries themes of ill-begotten judgement on women with a lifestyle alternative to that of her peers.

Ruth Malone wakes one morning to any mother’s worst nightmare: the disappearance of her two young children. The novel follows the stories of Ruth, the accused single mother with a reputation for drink and casual relationships, and Pete, the journalist desperate to make his break on a big story. As the case begins to unfold and the bias against Ruth grows ever apparent, Pete is faced with an inner struggle between doing what is right for the woman he has become infatuated with, or ruthlessly pursuing his dream of a successful career. Likewise, the reader watches Ruth buckle beneath the pressure of grief and suspicion, allowing an insight into her vulnerability throughout the grieving process others do not get to see.

There is a great emphasis on themes regarding judgement of women and the bias of the media within the novel; indeed, the two go hand in hand as investigator Devlin is bent on seeing Ruth locked behind bars, and Pete’s boss incites a rhetoric of gossip and female villainy in the young reporter. The writing style is effective in the portrayal of these themes, with simplistic and reporter-esque prose, wasting little on flourish, and striking directly to the point. Like news clippings, the sentences are fast-paced, and while the story itself takes its time, much will take place within the span of just a few pages: “Coming in that night, he threw his jacket over the back of the chair and loosened his tie, turned on the lamp, rinsed a mug, and filled it with cold water.”

There are several interviews throughout the book that delve into the backstory of secondary characters who, although they hold very little weight on the plot itself, help to depict the gossip-driven society wherein Ruth is so scrutinised. While the book is advertised as suspense, the first chapter, which places Ruth rather explicitly in prison, gives away how the case will inevitably pan out. While this perhaps strips the novel of its suspense, there is something to be said for the sense of futility that hangs heavy in the air, reflecting just how unfairly the odds were stacked against Ruth from the outset.

Overall, Little Deaths is an insightful read that delves into just one of many cases in which women have been unfairly judged by society for their appearance and lifestyle. The story itself is slow and meandering, taking its time to unfold, and making sure not to show its hand too early. Its exploration of character, and the crafting of the story all contribute to an interesting read.