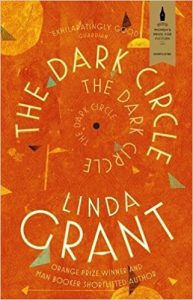 If one reads Linda Grant’s The Dark Circle, one may be left feeling unfulfilled; being presented with a remote plot about a remote disease that fails to tug on the heart strings or incite anger, as one would probably expect. So, this is the reason that I request you don’t merely read this novel: engage with the plot, consider the characters – compare our worlds. Fury, fear and fulfilment all require reader input, and the payoff follows the effort.

Set after WW2 and during the introduction of the National Health Service, the transitional period allows an insight into pre-war methodology and post-war reinvention. The deprivatisation of health care slams the upper classes alongside the lower classes, with the cultural clash an integral topic that is addressed in the novel. Grant uses third person narration to flutter amongst a variety of different characters who are all suffering from tuberculosis: there are upper class, lower class, immigrants, Jews, Christians, male, female – however, they are all sick, and they are all scared. There is a real humanitarian feel to the way Grant has incorporated the myriad of characters in the novel. Disease and fear are great equalisers in the hands of Grant.

However, even a reader engaging with the text may consider the stigmatisation of tuberculosis to be a moot point. After all, living in the 21st century how often does one alight upon a case of tuberculosis? We no longer treat sufferers of the condition as lepers. What’s the point? The NHS has alleviated these problems. Yet if we consider the following monologue from Captain Jackson it becomes clear that Grant is arguing that the stigmatisation of illness still takes place today.

We don’t want to admit that we don’t give a damn about politics, that our mock election doesn’t matter, that holding it doesn’t matter. We’re half-dead inside. We like the place, we tolerate it because we are scared of leaving, most of us scared of what the world is changing into and having no place in it. You have to remember the whole aim of the good old Gwendo is to turn us into invalids, permanent patients, I suppose you got the talk when you arrived.

We know from the context that Captain Jackson suffers from tuberculosis, but ignore the context and focus on his message. He’s “half-dead inside” and feels as though there’s “no place” in the world for him. Here, Grant is deliberately using ambiguous terms so that the monologue can be interpreted as that of someone suffering from mental illness. The fear and despondency that run throughout the passage make Captain Jackson seem as though he is both paranoid and depressed. By creating this parallel between tuberculosis and mental illness Grant calls attention to the fact that, even in our cosmopolitan world, we still stigmatise people and conditions that we don’t understand. Yes, we should get angry at the way the characters in the novel are treated but that means we need to be angry at our own culture: we are no better.

This is not the only political front that Grant approaches in this novel. With a government flailing back and forth on the NHS and whether it should be privatised, Grant stamps her foot firmly down in the reject camp. The doctors, nurses and volunteers of the private era are shown as morally skewed as they indulge in illicit relationships with patients. Psychoanalysis of Dr Limb shows he has nothing shy of a God complex. Compare the world of the novel with our own. How do we fight these problems in a system focused on money rather than care?

The Dark Circle, as a title, automatically brings forth the mark of death association – Davy Jones is on the hunt. It could also be aligned with the cyclical nature of the stigmatisation that our culture imparts on the suffering. But read the novel; it is more beautiful than all of that.