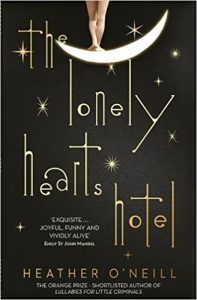 With vivid illustrations, poignant metaphors, and poetic nuances, Heather O’ Neill’s The Lonely Hearts Hotel entices its readers with a narrative about outcast characters seeking to entertain New York City with “The Snowflake Icicle Extravaganza” on their search for stardom. The Lonely Hearts Hotel focuses on the interconnecting themes of fate and tragedy, hope and persistence. Early in the text, it is suggested that “we are really nothing more than our foibles and that, were we to eradicate our flaws, there would be nothing left of us at all.”

The Lonely Hearts Hotel is a book about adapting to poverty and death.  Throughout the novel, there is evidence of tension between what happens onstage and offstage, linking both sides of the actor’s “lives.” Longlisted for the Baileys Woman’s Prize for Fiction, Heather O’ Neill’s novel spans WWI through the Great Depression to the start of WWII as it tells the story of Pierrot and Rose, children who first meet in a Montreal orphanage. A bond between them strengthens when Pierrot, a piano prodigy, falls head-over-heels in love with Rose, a natural actress. In a moment of spontaneous creativity, both combine talents to stun audiences with their comedic performances. Yet, in time, both children are separated and thrust into a world of gangsters, self-absorbed philanthropists, pornographers, heroin-addicts, and criminals. O’Neill’s Bildungsroman follows Pierrot and Rose as they struggle to reunite and return to their dream of a circus double-act.

The Lonely Hearts Hotel is a book about how one’s personal experiences and circumstances often alters one’s dreams; Pierrot evolves into Rose’s deepest desire just as she becomes his—what they might have wanted for themselves and for each other changes over time.

O’ Neill’s story is full of depravity and despondency. Her characters despair, and rightly so, as their struggle to survive often steals their dignity. Brutally abused, punished, and raped, Pierrot and Rose exhibit an astounding amount of faith in each other. Wracked with misery, the narrative itself is absorbing. It suggests hope for a happily-ever-after ending; however, the novel is far too complex for such a finish. The novel, a mystifying read, successfully balances on a fine line between tragedy and fairy tale.

With intentionality and skill, O’Neill writes as a detached author, leaving readers to interpret scenarios, judge characters, and surmise the denouement themselves; however, some of her own analogies suggest secondary, significant interpretations. From the first sentence, The Lonely Hearts Hotel intrigued me with its poetic phrasing, imaginative story, and historical founding. Initially, I was taken aback by the way O’Neill depicted controversial, and rather crude, events; however, as the novel progressed, the author’s control over each and every detail was evident. While there were chapters towards the middle of the novel that left me unsure of where O’Neill intended to take the storyline, especially as they seemed to stage an unnecessarily expansive gap in the narrative’s chronology; the characters themselves carried the plot from the tale’s unexpected twist to its final sentence.

The Lonely Hearts Hotel represents a theatre of imagination where nothing is impossible. Here, ruined innocence can be redeemed and the lost can once again find love. Despite the depravity that intentionally darkens her fairy tale, Heather O’Neill’s focus on the rawness of human relationships is truly commendable.