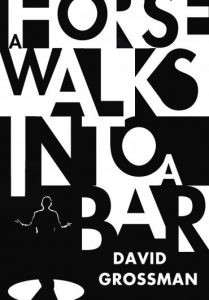 Shortlisted for The Man Booker International Prize of 2017, A Horse Walks Into A Bar is about the power of words—their purpose in a world that prioritizes only pretences. David Grossman’s combination of daring, controversial dialogue and compelling, desperate characters carries reader curiosity from introduction to denouement. It is a novel that demands attentiveness and commitment, the kind of commitment that asks readers to develop new perspectives about those whom they think they know, or knew. For Grossman’s observer-narrator, Avishai Lazar, that truth hits hard and heavy as he reflects on the days of youth, the affects of time, and the harsh, evolving realities plaguing a broken, changing nation.

Delovah Greenstein, the focus of Grossman’s feature, is a stand-up comedian intent on provoking both the audience and himself, consequently, intensifying his role as a storyteller. He takes his audience to a new place while reminiscing on old memories. To quote Avishai Lazar at the end of Greenstein’s performance:

It seems […] that people are trying to understand how — with what sleight of hand, through what trickery or magic — they’ve been transported from the place they were in a few moments ago to this new story.

A Horse Walks Into A Bar transports its readers to that small club in Netanya, Israel, where one man, “small of stature,” stands ready. Despite Dolevah’s professionalism in his field, signs of an internal struggle begin to cut straight through his comedy act and transform it into a monologue about depravity, despair, and darkness. Towards the end of the novel, onlooker Avishai realizes that “the temptation that is so hard to resist — the temptation to look into another man’s hell” is what sustains the relationship between audience and actor.

We, as readers, are subtly and yet with great impact, introduced to Avishai with a single line on page four: “I’m the one he’s looking for.” Avishai has come to watch the act of one person for said person with only one purpose—to do as Dolevah begged: to see. Dolevah who, at the beginning of the book, asks and answers his own query; “What do I want from you? […] I want you to look at me […] I want you to see me, really seeme, and than afterwards tell me.” A Horse Walks Into A Bar has a profound purpose; it  seems to imply that to truly see someone is to know who they are beneath their surface level self.  Halfway through his performance, Dolevah sighs, “So anyway, I’m talking about a simple soul…. A rookie soul, no upgrades, no bling, your basic regular soul.”

The visible and verbalized tormented side of Dolevah is what Grossman intends for readers to see and come to recognize in themselves. Similarly noted by the narrator, audiences follow “the split screen of joke and joker, drawn to them both.” Readers understand, and feel the same stress as Dolevah – “The stress of having to make people laugh at any cost, and how we basically beg [others] to love [us].”

A Horse Walks Into A Bar captures the role of the audience with as much color and focus as it does the responsibility of the comedian. Grossman’s audience is at first, “wary of committing,” ever-changing, always-evolving and finally, “roused.” It is a novel set over the course of one comedy-act, yet its story connects time with both loss and love. A successful experimentation in both tragedy and comedy, A Horse Walks Into A Bar, translated impeccably into English by Jessica Cohen, is a heart-wrenching, heart-warming wonder of a book.