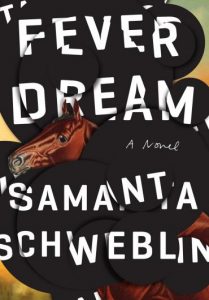 What kind of worms?

Two voices present themselves: one in question, one in answer; a child and a mother, yet sharing no relation. The subject of conversation is unclear, the situation likewise. We know only a sense of unease. As the dialogue unfolds, the child, David, guides the stricken Amanda through her recent past in search of “the exact moment when the worms come into being”. Exactly what these worms are is unclear, but their sinister significance is not.

Fever Dream may be Argentinian-born Samanta Schweblin’s first foray into the novelistic form, but she is not new to the art of storytelling; her short story collections have attracted numerous accolades and have been translated into 20 languages worldwide. Her command of her craft is clear, and particularly evident in Fever Dream is the economy of language and plot requisite of the short-form narrative. At just over 150 pages, the novel is a short yet utterly compelling read that sets the past and the present on a collision course, generating an atmosphere of creeping dread around Amanda’s recollections of what seem, at first, to be rather mundane interactions with her infant daughter and a friendly neighbour.

There is a Gothicism at work here, not unlike that of The Yellow Wallpaper, as Schweblin taps into our instinctive fear of the unknown, our unease with that which we do not understand. As Amanda recounts the story Clara, David’s mother, told of his childhood, elements of the supernatural begin to emerge; the relationship between the two women begins to sour as David is cast as the sinister Other. Although initially wary of Clara’s conviction in the presence of the supernatural, Amanda soon finds that the possibility preys upon her mind, becoming progressively, feverishly, paranoid for the safety of both herself and her daughter.

The strength of Fever Dream is Schweblin’s canny choice of narrative style. Presented as a dialogue, as one long conversation relayed in the first person, the events of the novel are filtered through Amanda’s perception which, as the story unfolds, becomes increasingly suspect. As the narrative progresses, Amanda becomes less certain of events ‒ of when and where she is ‒ and the reader, by extension, shares in her confusion. By tethering the narrative voice to Amanda, Schweblin likewise tethers her readers to a single perspective. As such, we know and understand only as much as Amanda does, and at the novel’s close fewer questions are answered than not.

The irony of the novel’s question and answer format, however, is that the answer that David strives to guide Amanda towards is ultimately unimportant. Though a realisation is reached, it is the multitude of further questions raised by his probing that give the novel its rich texture of paranoia, unease, and mystery, that is threaded through also with Amanda’s desire to protect both Clara’s child and her own. The plot itself may be easily summarised in a single sentence, and yet the complexities of emotion, character, and worldbuilding that Schweblin manages to construct so succinctly are both rich and remarkable.

Compact in both volume and construction, it takes only a couple of hours to ride out Schweblin’s aptly named Fever Dream. And yet, as with its namesake, the novels’ vivid imagery and palpable atmosphere linger long after the story’s end.