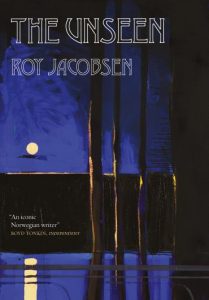 In this entry for the Man Booker International, acclaimed Norwegian writer Roy Jacobsen offers an intimate novel which showcases the moving and evocative powers of literature. The Unseen is a book which on the surface, through its accessible and uncomplicated language, seems simple and plain: the lives of a single family living and sustaining themselves on their own island. However, beneath that exterior there is a clear mastery of language and storytelling. Jacobsen creates a wonderfully immersive, self-contained world in which his handling of novelistic features such as place, time and characters are most impressive.

The first, most intriguing feature of this novel comes from how Don Bartlett and Don Shaw have chosen to translate this work into English. This is most evident in how direct speech has been translated. Although it is used rather sparingly throughout the text, the use of speech has been translated not into standard English as we might understand it, but a kind of “hybrid” of Norwegian phonetics to create words that can easily be understood by the English-speaking reader. This vernacular is reminiscent of the way in which some writers may write in a Scots dialect:

It is difficult to say whether this is a choice made by the translators or something that Jacobsen had intended in his original text. Nevertheless, it is a pleasure to read and further grounds the place and characters in reality, and helps maintain the novelistic illusion of being with these people on their island; it is testament to the sort of power literature has in transporting a reader from the comfort of his armchair to another time or place. Had this speech been translated completely into Standard English, I think the spell might have been broken, making the novel less memorable and less effective.

The mastery of language is prevalent throughout the novel. Jacobsen uses his craft to build a vivid sense of the islanders’ lives and the world they inhabit, and this is rendered with immediacy and intimacy. So much of this novel is about place and setting. The author describes the landscape with precise, almost scientific, detail yet does not compromise on his lyricism. In a section on time and seasonal change, and their impact on how the Barrøy family live on the island, Jacobsen writes,

…they can collect the stones in the spring and make the walls even higher, these walls which divide the island into nine sections, or acres as they call them. South Acre is the most exposed, the sea crashes here, with all its brutality. Then comes Bosom Acre…because of the conical green haystacks and grass-strewn patches of protruding rock…

The novel is filled with vivid images like these rendering the inhabitants of its setting more believable, and making the land seem more lived in. The daily lives of the family, working the land, encapsulates the novel’s central concerns: “Nobody can leave an island. An island is a cosmos in a nutshell, where the stars slumber in the grass beneath the snow”. Jacobsen’s writing in this book has a way of taking ordinary thoughts and ideas and elevating them to something greater. The crucial role of the island as a self-sustaining world is beautifully illustrated. Narrated largely in the third-person present, the reader is given a further sense of viewing this cosmos from within as opposed to being presented with an omniscient god-like view from above.

The Unseen is an immersive experience which powerfully transports the reader to the small Norwegian island of its setting. Roy Jacobsen’s writing is simple yet luxurious, bringing forth the beauty in the seemingly mundane and everyday.