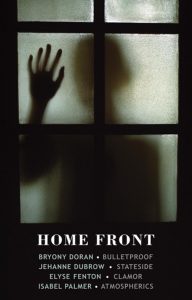 Home Front is a new volume of poetry by four women who have each had a husband or son who has been to a combat zone. Bryony Doran, Jehanne Dubrow, Elyse Fenton and Isabel Palmer are the poets, whose voices tell of having a loved one in armed conflict. Each poet has a collection within the volume with forewords by Ruth Padel, Ted Kooser, Rachel Zucker and Andrew Motion, respectively.

Isabel Palmer’s sequence, “Atmospherics” covers her son’s 2011 tour of duty to Afghanistan. “Atmospherics” itself is made up of three sections: “Home”, “Helmand Province, Afghanistan” and “Home”; the poet records events, thoughts and observations with a deliberate objectivity, hinting at her emotions rather than foregrounding them. In the “Helmand” section, the poem “Boots” sees Palmer making up a box to send to her son, who is on active duty and has had his boots stolen. Prohibited items are listed and the resulting array of approved gifts seems odd, random and useless: plastic boxes, washing line and pegs, Babybel cheeses. The turn at the end of the poem hints at a bizarre use for these:

and you said
what a pity you wouldn’t get the chance,
when you caught the guy who pinched
your boots, to string him up with washing line,
force feed him cheese and
throw him a Tupperware party.

Novelist and poet Bryony Doran’s collection, “Bulletproof”, narrates her son’s sudden announcement that he has joined up, through to his service in Afghanistan and eventual return home. Doran uses humour to avoid sentimentality here, an important strategy when approaching such a personal topic. Gift boxes come up again in Doran’s work. “Advice on a Parcel for Theatre” is a found poem, entirely composed from an army document, “A guide for the families of deployed regular Army personnel”.

Travel sizes are ideal rather than a family pack.
Variety is important too – it’s much nicer to receive a box
Filled with lots of different things rather than, say, toiletry items.

Doran skilfully uses the flattened language of the guide to suggest the heightened emotions of a mother sending gifts to a son she might never see again. In “First Call Home”, she ventriloquises her son’s breezy description of his life in Afghanistan.

Where are we? At a checkpoint
near Camp Bastion, ‘bout ten minutes by chopper.
We’re in a big tenet, ten of us, with mosquito nets.
Fucking cold at night.
Some parcels ‘ud be good, DVDs, some mags,
don’t take any notice of their advice.
and some sweets and pens for the kids round here.
Little shits keep chucking stones.’

Jehanne Dubrow has published six poetry collections. “Stateside”, a three-part work, was first published in the US in 2010, and is now included in this collection. Her husband is a US Naval Officer. In Part Two, she casts herself as Penelope, waiting for Odysseus’ return. The poem “Ithaca”, a short, rhyming poem in iambic quadrameter, shows the loneliness of a woman left behind

to guard her chastity, ties
it like a yellow ribbon to her door,
sticks it to the bumper of
her car, so that the neighbours know
she sleeps alone, almost a widow…

Elyse Fenton is a widely published US poet and the winner of multiple awards, including the Dylan Thomas prize. Her husband served as medic in the US Army in Iraq, during which time she wrote “Clamor”. Fenton’s superb use of language conveys her fear for her husband’s safety. In “Notes on Atrocity (Baghdad Aid Station)”, she is on the phone with her husband.

Mid-conversation someone comes
looking for body bags. Medic,
I can hear you rummaging
the shelves, know the small fury
of your hands and the way
they used to settle, palms sinking
heavy bodies, into mine.

So much more could be said of these collections. Each poet’s experience is described in voices that are authentic and powerful. Read them!