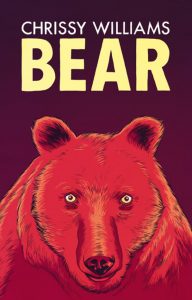 They say if you don’t like the Scottish weather just wait a bit and it will change. Arguably, the same might be said of Bear. This collection is so varied that if the style of one poem is not to the reader’s taste, moving on is hardly problematic and very shortly a more agreeable offering will appear. Although her poetry has been previously published, this is Chrissy Williams first book-length collection, containing 61 poems interspersed with quotes from people as varied as Rilke and William Shatner. The collection’s title is supported by the dedication,

for you
who also live and die
by the bear

and is perhaps explained in part by the brief biography which simply states, “she likes bears”. However, do not form the impression that this is a collection entirely and overtly about bears; certainly they feature as symbols and appear openly and covertly elsewhere. Bear is grouped thematically, and delves into love, life, loss and more.

The style of Williams’ poetry varies enormously –everything from free verse to a would-be sonnet. She also makes use of both type and the physical space on a page, often using italics for emphasis or to indicate a different voice, and additional spaces between words or lines giving the reader time to reflect. “Gone” explores the impact of the death of a child. Grief initially creates an inability to adequately articulate such loss.

The tongue is a set of scales weighing up language.
The poet is tongue-tied, blocked in the face of grief.
Words are difficult to draw out from this sorrow.
Yet some words come.

This moving poem continues towards its resolution as the poet shares her realisation that, “I must commemorate and share the memory of my son”, and with the words which grief initially stole.

I acknowledge the gift of language which has been given to me.
[…]
the language with which I can uncover truth.

Dark emotions also echo throughout “The Lost” where she describes reaching an emotional crisis when life’s “straightforward pathway had been lost.” As a precursor to the poem, Williams includes a three-line quote from Canto I of Dante’s Inferno, a translation of which she then incorporates into her poem.
It would be glib to say this is about a mid-life crisis; it much deeper. She writes,

Halfway through the story of my life
I woke to find myself in a dark wood[.]

Language persists in expressing the depressed, even frightened state of the narrator with expressions such as, “gloomy wood”, “forest dark” and “shadowed forest”, all aptly describing the feeling of finding oneself on an alarmingly unfamiliar and unanticipated path through life.

Yet these poignant poems do not set the tone for the entire collection, for example, “Sonnet for a Zookeeper”. Here William has penned a traditional fourteen-line sonnet, not in the familiar iambic pentameter but in mesmeric lines of five repeating nouns and verbs.

Set out like a computer game, this poem demonstrates how the sonnet form still punches high in our digital age.

I had a wry smile when I recognised my own absentmindedness in “Where have you put the wine?” Williams’ dry, often black, humour threads throughout much of her work, not least in “Go” in which she imagines various way she would like to die, including being “Juggled by killer whales” and “After you.”

Bear is a diverse collection of sad, entertaining and emotionally honest poems. Many reference popular culture giving a contemporary touch to timeless topics of life and death. I suspect younger readers will find more humour than those further down life’s road who may recognise more of her underscoring pathos.