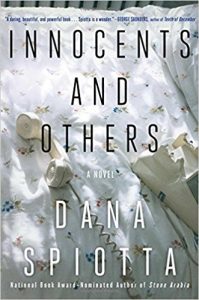 That is the thing about films. They don’t change. You change. The immutability of the film (or a book or a painting or a piece of music) is something to measure yourself against. That is one of the things a great work of art does. It stays there waiting for you to come back to it, and it shows you who you are now, each time a little different.

An insightful passage from Dana Spiotta’s captivating Innocents and Others, which so powerfully conveys one of the key ideas of the novel – that is, in a world increasingly captured and admired through filters and lenses, it is hard to ascertain a true sense of self as we continually edit and mould ourselves using such technology. Glowing with beautiful imagery, Spiotta’s novel reveals the marvel and magnificence of film but also casts a harsh glare over its devastating impact. An acclaimed author who has been a finalist for both the National Book Critics Award for Stone Arabia and the National Book Award for Eat the Document, Spiotta draws upon her strengths and creates a novel so thrilling in its execution that it is nearly impossible to put down.

The brilliance of the book begins in its front cover: an aesthetic delight. The image of a camera pertains to the central topic of film, whilst a hole cut in the middle allows one to peer through the lens. Turn the page and there lies an image of two women sitting side by side, the word ‘and’ from the title bridging the gap between them.

In this tantalising tale, we are introduced to friends Meadow Mori and Carrie Wexler, both filmmakers with very different approaches to their craft – Meadow makes challenging documentaries and Carrie makes successful feature films. Such a difference in views, not just in film but also in sex, power, and morality surely puts a strain on the friendship, and Spiotta teases this out throughout, developing characters so vivid and real in their portrayal that it becomes easy to empathise with them. Meadow’s passion for film is clearly conveyed to the reader from the beginning, confessing in her narrative: ‘I inhaled filmmaking in the air I breathed. I ingested it; I took it inside me.’ At times, she epitomises what it means to suffer for one’s art, as she increasingly finds herself questioning her identity: “‘But really, I am just trying to make myself. Out of looking at other people. I have no real self, I think”‘.

Innocents and Others is astonishingly complex, both thematically and in form. Non-linear, the story is delivered in a series of vignettes. Spiotta’s experimentation with form provides the reader with chapters in both first and third person narration, articles, and scripts. Similarly, whilst the story of Carrie and Meadow unfolds, the reader is also introduced to Jelly – a woman of mystery, of secrecy. Making a hobby of cold calling Hollywood producers, she gains excitement and a sense of escapism from it: ‘She did not feel the doughy curve of her large stomach […] She felt young and taut’. Jelly’s story is portrayed in a sensual, dark manner, and almost parallels Meadow’s – both are obsessional, and whilst Meadow’s narratives provide meditative passages on film, Jelly’s are on sound. So when the two eventually meet it is compelling, but by this point, Spiotta already has us entranced by the seductive nature of the novel.

Steeped in promiscuity, Innocents and Others is daring and addictive. Spiotta’s clever approach to structure and narrative is refreshing and testament to the novel’s originality, just as it highlights its intelligence, leaving many moral questions behind. How should we view art? How should we view ourselves? Perhaps there is no definitive answer, and perhaps Spiotta knows this, instead allowing her readers the chance to speculate.