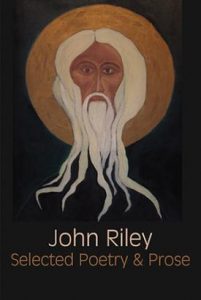 [S]ongs made dearer when gone than ever they were,
sung by heroes, animal spirits[.]

There has been a need for this volume for some time, a need perhaps fully established at Riley’s Light, the 2015 Helen Mort-organised Leeds University conference. Indeed many luminaries, Vahni Capildeo, Andrew McMillan, Ian Duhig and more have shared that journey.

John Riley, born in Leeds (largely the “Czargrad” of his most major poem) in 1937, had a formative and active role in the Cambridge School of Poets, the Grosseteste Press and the Grosseteste Review. In 1978, he was killed by muggers in his home city. At only 41, his contribution to poetry was already judged “not circumscribed by the concerns and trends of its day. [but where.] [P]recise observation and wit co-exist with an extraordinary beauty of image and rhythm.” (Michael Grant).  If it is impossible to say what he may have gone on to achieve, it is reasonable to say that this well-edited and introduced volume gives the reader a superb introduction to the scope of his achievement, and a real sense of what poetry has been denied.

This collection is arranged firstly as a chronological sequence of his own poetry, followed by a series of Russian poems in translation (primarily Osip Mandelstam, but also Boris Pasternak), of which “Mandelstam’s Octets” are a particular delight:

[…] you hold a
sentence not weighted by footnotes,
complete in inner dark,
and under its own steam,
eyes screwed up, it holds –

Lastly, there is a sequence of “Prose Pieces” which, though an accurate label, does not perhaps  truly describe the prose-poetic treat completing the book. For example, considering his cottage in winter: “And devils gather thickly in the trees”.

Like his poems, these writings are erudite, contemplative, acutely observed and spiritual, and also sometimes overtly religious – Riley was a convert to Russian Orthodoxy. While his searching faith and the rich Orthodox iconography is deeply threaded here, his lines are neither preachy or didactic. His was the deft poetic exploration of faith we now see in Michael Symmonds Roberts.

God is my gunpowder because God is not God.

…
Completely unexpected. This children’s crying. This snow at Easter.

At their age at our age at any age shield us
From the savagery of judging others.

That should not suggest that these writings are uniformly sombre – far from it; particularly in his prose Riley is revealed to be playful, a dry wit, and throughout his words are underscored by a real empathy for the human condition. Curiously, there is much here which recalls the very different MacCaig in his search for what the Scots poet termed “so many questions unanswered”; in Riley’s line, “I am trying to avoid metaphor”.

While Riley’s excellent ekphrastic poetry does, of course, show a poet highly sensitive to visual art, and while it seems highly probable that this quality impacted on his writing, in structure as well as subject-matter. What particularly thrilled me in Riley’s poetry was the technical development of those very rhythmic qualities Grant mentioned. The chronological sequencing of the work allows the reader to appreciate the increasing challenges and risks with whitespace, line breaks and punctuation. Read aloud it becomes very apparent that his changing and innovative use of spacing and punctuation is not simply important on the page, nor just visually satisfying. As these poems progress, the punctuation begins to function increasingly like musical notation, and his spacial pauses are systematic and controlled, avoiding what might otherwise congest into sensory overload in a more conventionally-shaped poem. Similarly there is a musicality in his use of repetition, particularly in lines with bookended phrasing, reinforcing the truth that repetition in poetic terms is never truly only that.

This book explores the legacy of a master of his form, cut off in his prime.  We are all the poorer for that loss, but also the richer for this book.