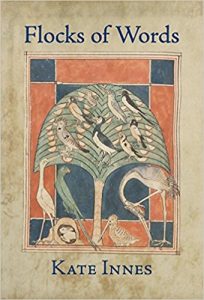 Flocks of Words, Kate Innes’s debut poetry collection, draws deeply on her love of the medieval, the mythical and the imaginative, which she overlays with a profound connection with nature and the Shropshire hills in particular. Her music is the music of distant stars and of creation, sometimes almost Miltonian in its wonder and terror. Her Earth is “a blue-blazoned orb hanging on the neck of night” (“Creation Myth”) and she writes,

Before time was measured and marked,
in the great black between the stars,
beings lived, one of each kind.

Divided into five sequences, the collection moves back and forth through time, from pre-history to the present day, through vast land- and space-scapes, often with troubling scenes of biblical horror amidst images of the Creation.But the clear poetic stream running through all Innes’s poems (yes, she is obsessed with water) is a seemingly boundless imagination and immersion in the ancient world, often also closely bound up with images of both water and the universe.

The titular poem takes its imagery from the world of migrating birds to consider the living, organic, self-renewing nature of words; it imagines the freedom of not naming objects, “like the unseen stars at the edge of the universe”, “like Eden before Adam spoke.” She envisages word-birds returning, refreshed and new to enhance language. In “Walking the Hills” she turns to Darwinism to contemplate the evolutionary nature of earthly things;

Elsewhere she focuses in on the minute, “the gyroscope of butterflies, / waterboatmen and the rifle sight/of the heron” (“Where it May Lead”) or on the discomfiture of a boy fishing and his inability to accept the distress of the caught fish. (“Fishing”).
Above all, Innes’s poetic focus is on the oneness of man with his environment, an impression of infinite continuity. She returns to a time when there were no noisy, polluting cars, “Before the drone of the road” . She paints a picture so vivid that the reader is tempted to linger, reading and re-reading:

In the time when the slice of oars and poles
slit the shining water down to twisted roots
and the river vein healed itself with the eddies,
with swimming sky.
(“Winter River”)

In “The Morning Path” Innes refers to the earth as a “familiar body” and, in “Late Light”, the sun belongs to the whole world, shining not only on her but on “all the Russian steppes”. Again, the collection invites the reader to look beyond the immediate environment, while also delves into the mysteries of the natural world. “Snowfall” focuses on the miracle of snowflakes, “… unseen/laws of our constrained belief, /fragile pieces of divine space.” Innes’s integral connection to the earth and to the universe is profoundly spiritual and overt: “I am part of the universe” (“Constellation”). Its magic and mysteries are as important to her as those matters offered by the real world.

If Innes’s work is widely informed by other artists, painters and wordsmiths – Christina Rossetti, van der Weyden, Velazquez, primitive cave painters in France and the stained-glass artist Margaret Agnes Rope – it is her broad and yet intense observation of nature which, for this reader, makes this collection very special. In “Spring”, lambs are described as “just bones/covered in a crochet of silky wool.” And in “Sleeping Dogs”, she allows the creatures to sleep – “Let them dream/, the wolf inside”. The gory nature of childbirth, too, comes into the great pattern of Innes’s poetic thought in a collection which will tempt the reader to return again and again to her observations in this lovely work. I look forward to her next collection.