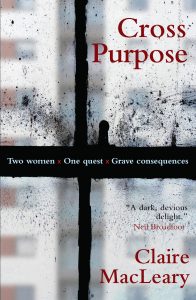 Cross Purpose is an energetic debut novel that attempts to perform a balancing act between a gritty Tartan Noir and a darkly comic detective novel. Claire MacLeary’s first novel jumps into Scottish crime fiction with both feet. She doesn’t flinch away from the torrid tedium of life in Scottish council estates, but embraces the dichotomy of monotonous day-to-day living and the enterprising ingenuity of the insular breadline communities. She writes with a cheeky elegance, and I don’t think I can accurately convey the stark authenticity with which Macleary depicts certain scenes, like the moment Maggie identifies her husband in the morgue, or alcoholic Kim’s listless desperation in the multi-storey flats. But, because the tone of the novel is a little hard to pin down, these moments can be quite jarring. Often Cross Purpose feels like it’s following the “buddy cop” formula; the dramatic tension of the central mystery and the internal conflict of clashing personalities is pretty much spot on for the genre. Add to that the comedy of some almost farcical situations and Cross Purpose would seem to fit the bill perfectly. But, the visceral scenes of mutilation, sex and substance abuse, and the often bleak mood takes some of the energy out of the comedic moments, leaving them a little flat and awkward.

Cross Purpose is a novel stuck teetering on a precipice, and for all MacLeary’s masterful build of tension, the drama and action never quite come to fruition. She never quite commits to the dark and gritty or to the comedy. The lack of commitment carries over into the character development as well. Maggie has recently lost her husband and her stable life is crumbling under the pressure of enormous debt and family tension. Wilma, bored and a little lost in her new neighbourhood, encourages Maggie to take over her husband’s struggling detective agency. Their budding friendship, how they tackle the prejudices of a traditionally male arena, and resolve their own preconceptions of social status to learn to work together, should be at the heart of the novel. However, the book is sorely lacking some scenes that really progress their relationship.

The timeline isn’t always clear; their friendship seems to grow in huge leaps, often in the background, sometimes leaving motivations and logistics muddled.  Maggie, the protagonist, often crippled by insecurity and still so-recent grief, is seeking a sense of closure for her husband’s death and the sacrifices she feels he made for her in life. Guilt, fear and obligation are her driving force, and she never really grows beyond that. Wilma is struggling with her sense of identity after her new marriage introduces her to a new community; she hails from the outskirts of Aberdeen, the parts of town that have a bad reputation and her contacts and know-how hint at a nefarious history. Unfortunately, hints are all we get. There isn’t any real depth of emotional investment in the characters. The central story of their relationship, the story that should carry the budding series on in sequels, is overshadowed by the deeply compelling evolution of the criminal characters, Fatboy in particular.

Cross Purpose’s tightrope act doesn’t quite work for me; it’s a little too upbeat, a little too dark, and a little too shallow. The comedic moments often feel out of place, and can make the gritty scenes seem inappropriately casual, and I didn’t feel like there was enough meaningful time with the central characters. That being said, the writing is good, the murder mystery is interesting, and the criminals are fascinating. I hope a second outing for the detective duo will give them room to grow.