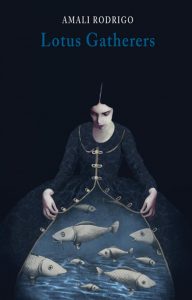 Reading Amali Rodrigo’s Lotus Gatherers is like taking into your mouth sweetness, sharpness and bitterness all at once. Then she engages your other senses – smell, sound, texture, colour. After that you’re hooked because beyond the initial sensory pull, there are greater riches, deeper depths. Lotus Gatherers is Rodrigo’s first collection, though she has already won, or been highly commended in, several prestigious international poetry prizes. Born and brought up in Sri Lanka, she’s lived in Mozambique, Kenya, India, and is now based in the UK.

Rodrigo is a storyteller with a multicultural frame of reference; she takes the myth, customs and dark histories of her own and other cultures, and makes them sing in her unique voice. She speaks the precise language of a botanist or oceanographer, but at the same time learns from her mother “a lexicon of old ways.” She knows that crows with their “obsidian cloaks and slicked-back hair” bring messages from distant worlds, and that she must learn to read the writing of their claws in the dust. Those old ways, she understands, still impact on human behaviour, and are intrinsic to our responses to contemporary issues.

Several poems in this volume examine tough political and gender issues such as civil disobedience, lynching, female self-immolation, rape. In “How to Watch a Solar Eclipse in a Bowl of Water,” written of Kandy in Sri Lanka at a time of insurgency, the eclipse in the bowl of water is an extended metaphor for looking obliquely at shocking events as a means of survival. In “The Fish,” the issue of enforced marriage after rape is addressed through a running commentary on a young girl’s pregnancy from the foetus. The stink of rotting fish is almost palpable.

However tough the subject, though, Rodrigo is never bleak. One of the greater pleasures in Lotus Gatherers is her “Aftersongs” sequence, based on fragments of graffiti-poetry inscribed on a cliff face at the ancient royal pleasure palace of Sigiriya in Sri Lanka. Snatches of verse were written by passers-by between the 8th and 12th centuries in response to hundreds of ‘cloud maiden’ frescoes painted on the rocks above. Rodrigo’s re-shaping of these mediaeval fragments is entrancing – richly sensual, lewd, funny and occasionally wistful:

Wife, ever present, ever virtuous
how unlike this wild gust
of gold and grace
that uproars the mind [.]

In “The Finger that Plucks the Lyre is Not the Song,” a series of epigrammatic stanzas, she takes the simple concept of a bell ringing in a quiet courtyard. In four short lines we see old stone walls, hear the dying reverberations of the bell and we stay still, as readers, until that small world returns to silence. It is a masterpiece of balance and economy of expression.

In the aftermath
of a tolled bell
grass and gables attend
to each other again [.]

In her own life, Rodrigo embraces both west and east, and a recurrent theme in Lotus Gatherers is the sometimes uncomfortable juxtaposition of different ways of thinking and living. But in “Kintsugi” (the ancient Japanese art which recognises the beauty in broken ceramics and repairs using seams of gold) she expresses a philosophy of consolation, and it may be the most personal observation in her collection. This is exquisite, clear-sighted work from a poet who can express the universal and the particular in language of great intimacy.

I had not known how I believed
in a durable self until I saw, in mending,
a void amassing in the bowl.