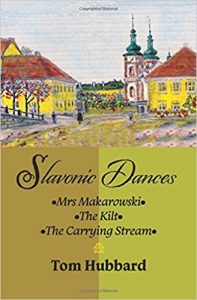 Tom Hubbard was the first librarian of the Scottish Poetry Library and is the author, editor or co-editor of over thirty academic and literary works, including several novels and poetry collections. Slavonic Dances, the name given to a series of orchestral pieces by Dvorak, is a happy title for this sequence of novellas whose characters in the first two are directly involved in watershed events in Poland and in Czechoslovakia, while Russian culture figures prominently in the third and last.

In the opening story, Fifer Mrs. Makarowski marries a former Polish soldier. In the next, Dunfermline-born visiting student Angus and his Czech student lover are on the spot during the Prague Spring and witness Dubcek’s downfall when Russia invades. Lastly, Glaswegian poet Martin reviews “his knowledge of Mussorgsky the man” with passing references to other Russian cultural icons.

“Pale and trembling” with rage upon learning, about forty years later, that the commanding officer he had “venerated”, had in fact collaborated with the Nazi occupiers, Mr. Makarowski banishes from his house his wife’s longstanding friend simply because she is a great-niece of the traitor. Hubbard renders local dialect faithfully, as when Mrs Makarowski observes that her dying husband will “no gie in easy, hen,” but this facility is not enough to breathe life into his characters. Part of the problem may be the difficulty in developing more fully the four of five main characters introduced in the slightly fewer that forty pages of a storyline skipping to and fro between the 1940s and the twenty-first century. For example, far from being depicted in the round, Mr. Makasowski’s enduring bitterness as an exile whose home country has been despoiled by invaders is his sole meaningful part in the story.

Similar shortcomings are evident in “The Kilt” where an elderly Angus reminisces on his experiences in Prague thirty years earlier when a Soviet invasion put paid to Dubcek’s attempt to free Czechoslovakia from Soviet domination. Here again, characters are inadequately fleshed out, perhaps because the Czech students are idealized as displaying “such a unity of the individual and the social being” as never again may be achieved. Angus describes those “‘back home’” as “meaner spirits” in contrast to these paragons who are little more than mouthpieces for the likes of Kierkegaard, Jung and Freud whom they quote sententiously and at length. For comic relief perhaps, there are cameo appearances by an odoriferous American student whose more worldly concerns extend to asking where he can “git laid” and where he can “git stoned.”

“The Carrying Stream” is also the reminiscences of an elderly man. Only twenty pages in length, it includes Martin contrasting a “perfumed, dapper, witty” young Mussorgsky with the “unkempt, bleary-eyed” creature he later becomes. There are also passing references to Rachmaninov, Dostoevsky and Gorky amongst other cultural notables. The author’s sure touch with dialect is again evident when Martin’s Irish mother urges him to “Jus tink o something” and later refers to a “Fadder O’Neil.” The volume includes a glossary of Scots dialect.

It is difficult to warm to these stories because the characters are too thinly drawn to engage interest or touch the emotions. The reader is not charmed into sharing the bitterness of the Polish veteran or the euphoria of the Czech students. For this reason, the stories are stillborn and lack the enchantment required of a work of fiction which persuades the reader to suspend disbelief. The events described, however, have particular relevance for Scotland which, like Poland and the former Czechoslovakia, has an ambivalent and often fractious relationship with a much larger neighbour on its border.