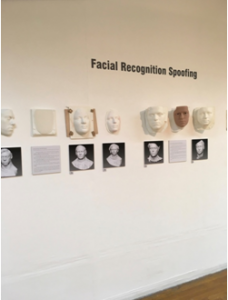 Within the last two decades computer-assisted forensic art and facial identification has taken hold of the public’s imagination, with examples ranging from the identification of victims of genocide to the reconstruction of Richard III’s face. DJCAD has played a leading role in such projects. The 2017 Master’s exhibition shows us what can be done with forensic art techniques, and also demonstrates the discipline’s rigour and self-reflexivity.

Examples of the latter self-examination include Namy Culpin’s project investigating  the extent to which a computer’s recognition of faces can be fooled. A range of life-like facial masks are displayed on the wall. These silicone masks of people’s faces have been created using 3D scanning. Again using the same technology, the inside of the masks has also been moulded to fit the face of another person. Images of the masked person and the original participant can then be used to test the computer’s ability to differentiate between the two.

Another example of techniques being tested is seen in Gustavo Faúndez-Selinas’ project examining the work of forensic artists when drawing suspects’ faces in video-linked discussions with witnesses. The project explored whether having the witness able to view the artist’s working space, and thus feel some co-location with him or her, would influence the accuracy of the outcome. In science, a negative result is as important as a positive one – and in this case, the project found no correlation between the witnesses’ ability to see the artist’s place of work and the accuracy of the resulting image. 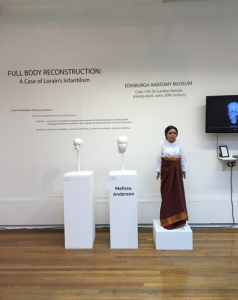 Charles Ritchie’s project examines the use of facial 3D modelling in addressing the problem of identifying individuals from CCTV images. These are usually taken from a height and at an angle, whereas police photographs of suspects show straight-on front and side views. The scanned 3D models were positioned at an angle and the CCTV images were projected on to them, resulting in considerable success in identification of the images in a test situation.

Two students have recreated the appearance of individuals suffering from specific medical conditions. A full body representation of Lorain’s Levi infantilism is presented by Melissa Anderson, using a skeleton collected in Sri Lanka (then Ceylon) by Dr. Osman Hill in the early twentieth century and loaned from Edinburgh University anatomy collection. 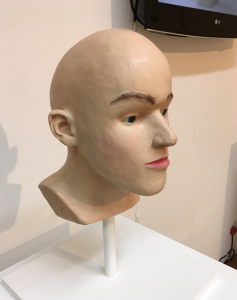 At the opposite side of the room Sean Fergus exhibits a facial reconstruction from a Scaphocephalic skull – one which carries the effects of a premature fusion of the sagittal suture in the infant skull. While such cases are now preventable this was not the case in the nineteenth century, the date of this skull.  While the patient and his story remain unknown, we 21st century viewers can now gaze on his facial features thanks to the reconstruction.

Finally, two students have produced contrasting facial reconstructions of individuals whose skulls were obtained during the Challenger Oceanographic Expedition of 1872-76. Dagmara Roguska has recreated the face of one of the San people (Bushmen), while Tamsin Watson-Darby was presented with an unidentified skull 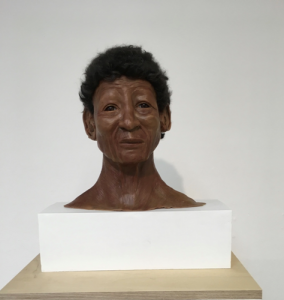 known only to be of South African descent. In the course of the reconstruction more information was uncovered, revealing the skull to be of possibly South American (Fuegian) Bushman origin.

All of the work on display is fascinating in different ways and it is clear that this unique course continues to create ground-breaking work in its fusion of scientific and artistic expertise.