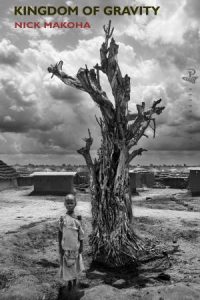 In the 1970s, before the advent of our daily intake of internet reporting, the name Idi Amin Dada evoked a vague sense of horror too distant for the details of his reign of terror to be clear.

But in Nick Mahoka’s collection, Kingdom of Gravity, his reader is confronted with the reality of a challenging and bloody record of a childhood derailed by “a failed political experiment” (“At Gunpoint”).  Violence and death filled a landscape as dark and threatening as the cover of this book, where a child stands alone beside a dead tree in an African setting, thunderclouds gathering in the background. It was from this Ugandan landscape that Mahoka himself fled via Entebbe airport, escaping Amin’s purge of Asians. At the age of four he was a refugee losing home, family, and ultimately, his mother tongue (“The Fate”). A dire warning to the world of today? The processing of  painful memories of loss, confusion and dashed hopes, where brief flashes of black humour are occasionally allowed to enter? A bitter song of the darkness which filled the African homeland of his childhood? I believe Mahoka’s collection is all of these and more.

For Mahoka, airports are a major source of symbolism; each of the five poem sequences in this collection bearing the code-name of an international airport: MBA (Mombassa); EBB (Entebbe); NBO (Nairobi) JED (Jeddha); CDG (Charles de Gaulle). For him, the airport is  “my changing room” in a personal or political sense (“Citizen”). The child flees from Amin via Entebbe. The adult poet remembers the arrival there in the 1970s of the high-jacked Air France flight and the rescue of passengers by Israeli storm-troops (“Entebbe International”), the terror of those events contrasted starkly with the beauty of flamingos on Lake Victoria. It was to Jeddha airport that Amin was taken to begin his ultimate exile in Saudi Arabia and where the child Mahoka had waited for his father, holding a plastic toy bought for him by his mother in Britain (JED:). In gruesome contrast, “The Shepherd” describes the brutal interrogation of a simple shepherd tortured for information and dismembered alive on the road, and where others were forced to dig several graves for his body parts.

A deep sense of guilt surfaces from time to time, guilt from having been unable to rescue his fellow countrymen from the hell of this benighted post-colonial Africa. In “The Old Dark” he regrets his homeland’s “love-affair with arms” and longs for some power to “stop your country’s screams”. Virtually every poem represents a reconstruction of the horrors of civil war, an incessant stream of killings, patricides, gang rapes, unimaginably brutal torture, self-immolation, boy soldiers “trained in wickedness” (“Candidate A”), cannibalism and the spread of AIDS, all overlaid with the stench of kerosene, smoke and death.

Amin, named only infrequently, is often referred to obliquely, sometimes as “the farmer’s son from the delta” or as the soldier trained by the British Army, where he is on record as having been described as “bone from the neck up” (words borrowed by Mahoka). In a reference to a multiple killing reported to have involved cannibalism, Mahoka describes the man whose “cravings have no limit”.

Beautiful and powerful metaphors underpin relentless pain and darkness, like  “dark tattooed on my eyes”, “the sun abandoned me”, “the sky was an iris of black” (“The Bee”);  occasional flashes of black humour do little to stem “the silent tide of blood” (“The Executioner’s Song”). Kingdom of Gravity is not for the reader seeking comfort. Layer upon layer of painful African history – tribalism, colonialism, bribery, ritual and myth, too much to be explored here – make for a lasting monument to those who suffered and lost their lives in the chaos of a decade of brutality.