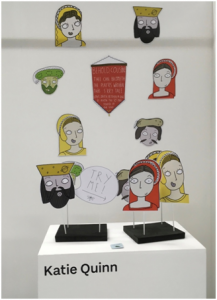 Dundee University’s Comics courses are internationally recognized, and the quality of the work in this year’s show demonstrates why. Seven students have their work on display, demonstrating a high level of skill and a willingness to experiment with the medium. The works vary from the wordless, where the pictures tell the entire story, to a quite detailed text. The majority of the work on display demonstrates a strong ability to achieve the correct balance between text and picture, according to the subject of the work.

Katie Quinn’s entertaining alternative biography of Ann Boleyn is full of lively characters whose minimal features are able to convey a great deal through their quizzical expressions. Quinn’s display also includes comical masks in the same style, allowing visitors to assume the characters of the historical figures in the comic and join in the fun. 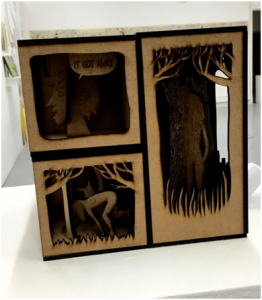 A much darker style is to be found in Zuzanna Dominiak’s work. Her subject is feral children and she hason display two works of a planned series. One of these, “Bird Boy”, uses the deceptively simple two-colour Riso production technique to tell the wordless story of a child kept in isolation. The narrative draws us into this child’s world, seen first from the outside and then from his cage-like environment. The wordless form of the narrative is poignantly appropriate to its subject-matter, as these children are often unable to speak.

An intriguing extension of the comic strip layout is found in Dominiak’s laser-cut three-dimensional comic, where each page is a side of a cube which frames the characters and action.

The superhero action style flourishes in the exuberant work of Gary Welsh, and fantasy is also the vehicle for Rebecca Horner’s web comic. Her brilliant colouring skills are admirably showcased by the on-screen delivery. 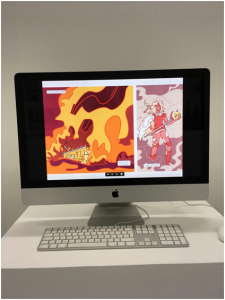 Graham Johnstone’s more subtle, limpid approach is highly suited to his proposed series on key events in the lives of the great artists. His graphic novel about Paolo Uccello depicts the artist coming to terms with the then new notion of perspective, while the work about Vermeer deals with the “Delft Thunderclap” – the explosion of the gunpowder arsenal.

Finally, two contrasting artists use a fictionalised autobiographical approach. Jim O’Ready’s “Hollow Monsters”, the first of a six-part graphic novel, is delivered to a high level of artistic and narrative skill, interweaving personal and political events. Marc Casilli compiles a series of short tales with an ironic voice which undercuts the apparently mundane plots.

At the exhibition, there is an attractive and affordable sale table where visitors are able to buy copies of the comics and talk to the artists about their work. The exhibition continues until 27 August, but it seems very probable that the talent of all of these entertaining artists means that their work will be commercially available beyond the confines of the gallery long after the end of the show.