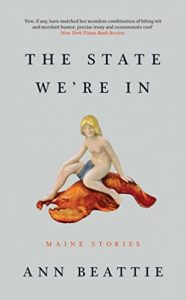 “You don’t think things like this happen in woodsy Maine, off the beaten path? It sounds more like L.A.? In Maine, there may be a path, but it’s never clear […]”

In The State We’re In: Maine Stories, we are transported to Maine – the coastal state that writer Ann Beattie recognises has the reputation of being unassuming, quiet and without drama. Yet, Beattie tears through these misconceptions in her enthralling collection, showing the reader that Maine, with its small towns and Adirondack chairs, is no stranger to scandal. Author of nine short story collections and eight novels, Ann Beattie is highly acclaimed for her work, with awards including the PEN/Malamud Award for Excellence in Short Fiction and the Rea Award for the Short Story. Demonstrating her prevailing mastery of short story telling, The State We’re In: Maine Stories is her first new collection in a decade.

The title itself carries much significance, as it not only indicates setting but also implies something much more. One may wish to apply the titular phrase ‘The State We’re In’ to the collection’s gloomy undertones – tales of the tragic and the mundane. Beattie challenges the idealistic visions of life and provides us with a much more sombre, much more realistic outlook on the world. This idea is fittingly described in ‘Major Maybe’:
“But it’s all deception, right? You understand that the picture shows more space than exists. You fall for the fresh vase of fresh flowers on the nightstand that in real life probably has the circumference of a pie pan […]”

A feature of Beattie’s writing that really shines in this collection is her ability to bring compelling characters to life. The reader is introduced to multiple personalities, each with their own voice, their own story and their own relationship to Maine. With intimate narration, we are given a close look into the lives of Beattie’s characters. One of these characters is Jocelyn – a cynical teenager sent to live with her aunt and uncle to attend summer school whilst her mother recovers from surgery. Featuring three times in the collection, Jocelyn’s story verges on tragic. In a situation in which college is deemed a ‘miracle’, and regarded as a ‘troubled teen’, she agonises over her predicament, wishing she could ‘pull up a hand brake’ on the accelerated summer program.

Part of the brilliance of The State We’re In: Maine Stories is how interconnected the stories are. Characters appear in other stories and situations previously read about are brought up in passing conversation later in the collection. Artigan’s death caused by yellow jackets in ‘Adirondack Chairs’ later becomes the subject of gossip in ‘Endless Rain into a Paper Cup’:
“You know what the bad guys did? They put yellow jacket nests into the ground, like they were planting flower seeds, because he was way allergic to yellow jacket stings.”

Beattie describes the process of putting characters from one story into another as a ‘sort of the put-the-little-plastic-elephant-in-the-dollhouse approach’ – a perfect way to put it, as for the reader it is as though peering through several windows of one big dollhouse. Contexts shift, perspectives change, and as a result a community is born. Beattie ensures that before we hastily pass judgement upon one character, secrets and truths are gradually unveiled, effectively widening the frame and altering our perceptions.

Much of the narratives involve speculating over the lives of others, which in turn sees life pass them by. Jocelyn comes to realise this fact – a hard truth which lies at the heart of the collection:
“[…] people bantering and wasting time, sitting passively in a converted barn that denatured everyone who entered…”.
The State We’re In: Maine Stories delivers rich, excitingly vivid short stories making for a pleasurable read.