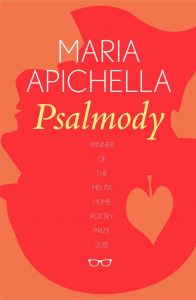 I cannot help but question:
Does he know the Lord?
…
So what’s his life about?
I want to know.

It seems misrepresentative to call this prize-winning début a “collection”. The word implies that each item within has distinctive merit to be effective in its own right. In the case of Apichella’s work, it is more of a poetic novella, where each verse is a numbered chapter; each poem informs the next, and as a result, the first excepting, no poem really stands alone without the support of its peers. Each is a pillar holding up a continuous narrative bridge, such that the whole only works effectively if traversed from one end to the other.

In awarding Psalmody the Melita Hume Poetry Prize, judge Toby Martinez de las Rivas praised its “deeply constructed symbolism” and “very beautiful and stark lyricism”; he is quite right on both accounts. The central conceit is the relationship between Apichella, or a version of herself, and David, introduced to both her and us as a man who “fires questions like a fairground gun – / often missing the target” (“6”). She is a devoutly Christian woman – “a Monastery carved into a granite hill” (“10”) – whereas, to her confusion and horror, he is an equally indefatigable atheist. The conflicts that develop alternate between interpersonal disagreements over religion, morality, spirituality et cetera, and Maria’s internal conflict between her intense feelings of love and her self-perceived guilt for loving such a heathen:

As the title implies, religion not only forms the backbone of the plot, but also dictates (to an extent) the poetic structure. It is no coincidence that “David” the protagonist harks back to the biblical King David, writer and curator of much of the Book of Psalms – a perfect irony, owing to his namesake’s atheistic status –  and comparisons with the verbal music of the Psalms are too clear to extrapolate. Most chapters are a couple of dozen lines or so – a few stretch over two pages or more; one, “13”, reads merely “I’m thirsty as earth in high summer.” Apichella is inventive in her use of spacing, tabbing, italics, and even the spacing of individual  l e t t e r s  for various emphases, sometimes using these techniques in combination. “76” stands out blatantly in this regard, in the odd position of being printed sideways, landscape-style, across its page.

Once characters and setting are established, the poems rather become sides and points in an ongoing debate. You can almost envisage David and the narrator conversing at a kitchen table over lunch, or walking together in a park, trying to unpick each other’s most profound beliefs – David asks “I trust in bodies, minds, soil. / Why should I twist to spirits?” (“21”); Maria appeals silently to God in resolving her internal disturbance:

Though set in present-day Wales, the symbols and metaphors echo biblical allegory as well:

Doesn’t a unity of three strings
make a cord less easy to fray?
Yet David won’t be looped.
He keeps snapping
my ropey psalms.

The aforementioned lyricism, too, is readily apparent, in lines such as “Drizzle, little slaps of wind. The stars spit / on this steep slip-shod road” (“27”), or in this breathtaking phrase:

You are like fingers after chopping chillies,
burning deeply long.
You soak down to the thud
and pith of me till all my blood
rings at the sound of your laugh.