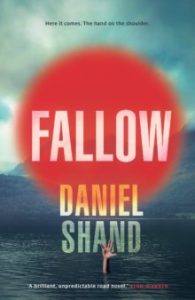 “Sometimes the thoughts I could conjure up when my eyes were closed would frighten even me.”

The word “fallow” refers to an area of uncultivated land: unseeded, empty, dormant. This proves a fitting title for Shand’s engrossing thriller. The novel reads likes a perverse retelling of stories like John Steinbeck’s Of Mice and Men, or Robin Jenkin’s The Cone Gatherers, in which two itinerant workers with a brotherly connection – one physically dominating yet vulnerable, the other small, cynical and cunning – struggle together to eke out a peaceful existence in an unfair world. Shand twists this dynamic on its head: our protagonist and narrator, Paul Buchannan, is a disturbed, sadistic character, and his relationship with his younger stepbrother Mikey – who himself commits various atrocities throughout the story – is abusive and controlling, however much Paul may attempt to lay claim to the role of reluctant, selfless, put-upon caregiver.

The term “fallow” may refer to either of the brothers. At the beginning of the story, Mikey has spent roughly the past decade in prison: his entire adolescence, from his early teens to his mid-twenties. Having emerged from the system uneducated, uncultured and psychologically scarred, he is a figure now of wasted potential, as the glimmers of kindness we see within him – his tender affection for a dog, for instance – as well as his hopes for re-entering society and a return to normal life, are repeatedly snuffed out by his brother’s influence. Paul orders him to do terrible things – such as strangling that same dog’s owner – he is a chillingly empty character, save for a constant rage lying dormant beneath his cool exterior. This is demonstrated best by the violence inherent in his narration regarding even the most mundane descriptions: “I could see the water from the air collect in my beard like shining blisters”, and by his constant references to his ‘blood’ going ‘up’ or ‘down’.

The two brothers are on a road trip through a Scotland that, while the names might be familiar – Dundee, Glasgow – is transformed into a cold and hostile landscape, where the mountains loom “low and dark”, the predatory ‘king eel’ lurks in the Loch, and tourists get lost hiking after dark. Though Paul meets a host of enigmatic, at times even darkly comedic characters constantly seeking connection – whether it be an archaeologist having an affair, an American brother and sister searching for the graves of their Scottish ancestors or a doomsday cult awaiting the return of Christ and His Revelation – he is himself “disassociated from the world”, connected to nothing and no one, least of all his home country. Even his apparent love for his brother, possessive as it may be, is ultimately revealed to not be as selfless as it first appears. In the end, Paul seems to find pleasure and connection only in death: he masturbates next to grave of a man he had Mikey kill, he fantasises about watching a raptor “dive towards the earth and snatch up its prey” and he sees ghosts.

The reader is trapped with Paul, helplessly watching as he sows further death and discord across the country. He hurtles towards self-destruction at an ever-increasing rate as the novel drives ceaselessly onwards, always finding new ways to ruin any chance of peace for himself or his brother, and then blaming it on someone else or the unjust chaos of the world. Such a pathological liar and self-deceiver is Paul, that the final grim reveal of the novel feels less like a twist than an inevitable conclusion, which both the reader and Paul himself cannot help but approach with a mounting dread.

All in all, Shand has crafted a tense thriller which never lets up the pace, in which no one escapes unharmed or without scrutiny, and which offers a dark and twisted vision of Scotland, seen through the eyes of a genuinely terrifying villain.