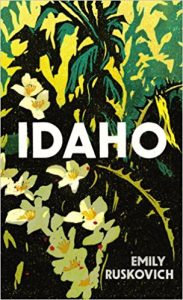 “The smell would have been there on the way back, too. It is the one constant. It connects the two things in Ann’s mind that she can’t manage to connect otherwise – the drive up the mountain and the drive back down.”

Just like the eponymous state, Emily Ruskovich’s debut novel presents a false etymology: an old truck with a burnt-nest smell, a mother in prison, a voice cut off mid-song in the back seat and a missing girl. This unspeakable story is the one which Ruskovich asks us to listen to; a grisly murder tale, a mysterious disappearance. It makes, as most etymologies do, a rapturous tale.
But it is not the tale she intends for us to go away humming.

The truth of this story is in the sound of it: the notes, rather than the lyrics. Like the sound of a miner calling out to his friend’s daughter, “Ida! Ho! Come back to me!”, this novel takes the intimately ordinary and makes it something mystical; like a made-up Shoshoni chant, this mysticism draws us in, sparkling with the promise of some ancient and profound truth. This novel is heavy with honesty, yet it includes no weighty truths.

How can it? The plot, after all, is riddled with senselessness. A senseless act of violence which explodes a family. An indiscriminate disease which renders two men senseless. A prison sentence so long that senses are no longer of any value. At the centre, if there is one, is a woman trying to make sense of the part she did not play in the horrors of her new family’s past.

That woman is Ann. She is the new wife of Wade. Wade, whose Alzheimer’s is slowly eating away the memories of the terrible accident – for you see, Ann can’t stop calling it “the accident” in her mind. Mostly, we are told this story by Ann; but there are other strong voices: Wade, and his deceased father; May, who will always remain a six-year-old; Jenny, who we try with all our might not to understand, and fail; Elizabeth, her cellmate, whose lack of remorse is comical in a Cellblock Tango kind of way, and Eliot, who Ann should never have thought about.

Other voices whisper little reprises, like back-up singers. One is a bloodhound, the one looking for June, who is missing. His song tumbles and swoops like jazz. He sings smells, the only sense he can make of anything: the undercurrent of exhaust, trucks, a chainsaw nearly gone now, antlers clashed against one another, a dull, shredded smell, small flies, their crushed brains on human skin and under weeds, men’s fear and cortisone, batteries shaken inside the lights they hold, a muted metallic buzz in his nose, tree bark cooling and crystallizing sap like honeycomb, honeycomb itself, beetles stirred, rubbing, bushes of spoiled flowers, cooling weeds, a cat’s breath on claws licked clean.

Ruskovich’s prose sings as quietly as the radio in an old truck, as loudly as police sirens. Rhythms like chopped wood and prison gates crank out the story. Melodies of conversations between girl dolls and sex on wooden floors pepper the ear. The joy, and the horror, is in the listening. Go up the mountain in Idaho. Things will not be the same when you come back down.