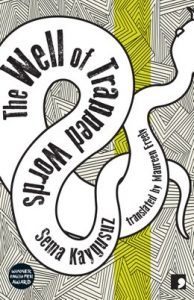 Sema Kaygusuz is critically acclaimed, award-winning, and described as one of Turkey”s leading female writers. She has written novels and screenplays, and The Well of Trapped Words is her most recent collection of short stories.

The first story of the collection, “Zilşan’s Feet” sets the tone for the remaining pages. Kaygusuz delivers a description of Zilşan (and her feet) which is vivid to the point of sensory overload. Wounds, sores and rashes on Zilşan’s body are described as “small aggravations [which] turn into great furies,” though her feet are “small, and lily white, with pearly nails … smooth as glass…” The tale appears to be one of class – Zilşan, impoverished, with too-long skirts, and bras that are sizes too big, bravely enters the jewel-like shopping mall in the hope of seeing a boy who once seemed to like her. Emboldened, Zilşan dares to try on shoes in a shop, but her feet begin to alter: “They get bigger and bigger, growing callouses, growing gnarled. Her toenails curl in.” It is revealed that Zilşan”s feet may represent her last anchor to reality, as the story ends with a letter from one of her relatives explaining that she has lost her senses.

Graphic body horror occurs again and again in these stories. In “Halfway Down the Middle,” Ömar Bey has “begun to rot,” and is held in the moment between life and death for an excruciatingly long time while the neighbourhood frantically search for the source of the stench. “Many Years Ago, I was Standing in a Meydan” has an almost Gothic arc, as Kekil Dede acquires new physical disabilities, such as a limp and a shattered hand from a bullet, after telling a story from his mysterious past.

This gruesomeness works to ground Kaygusuz’s stories, which often seem to have a supernatural element to them. Zilşan’s feet become twisted and infected without explanation or suggestion of metaphor. The same is true of Kekil Dede’s injuries, which simply appear suddenly, though the man insists he has always had them. There is a mystical quality which Kaygusuz takes delight in utilising, but not defining. In the title story, “The Well of Trapped Words”, the ability to speak with snakes and hear their stories is passed from a grandmother to her granddaughter. In the next two stories, “The Viper’s Son,” and “The Well of Broken Places,” Kaygusuz creates a clever trilogy which deals with inheritance, generations, and of course, life and death.

Not all of the stories tread this ground. There is an achingly beautiful portrayal of a woman breaking off a relationship in “Deep Inside”, as well as the slightly comically formatted “Nine Sons”, in which a letter of complaint is forwarded through various governmental departments before finally landing on the desk of the Prime Minister. Though humorous in its style, “Nine Sons” has a serious point to make about opportunity and displacement.

Attention must be paid to Maureen Freely, who has faithfully translated the stories into English from their native Turkish. In 2013, Kaygusuz wrote in The Guardian that “translation is a natural act: before it became an intellectual effort, it was a letting go…” In its reading, The Well of Trapped Words does indeed appear to have a very natural, effortless quality. Footnotes are used only sparingly to offer an explanation of unfamiliar terms to an English reader, and they never interrupt the flow of the story.

There is a clear through-line in Kaygusuz”s project, as she examines attentively and forensically the relationship between beauty and ugliness, life and death, and story and reality. In this collection are wonderfully haunting images, in stories which invite not only a second reading, but considerable thought and discussion.