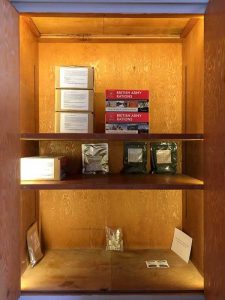 It is the empty space between, the reduced, then pared-back-again aesthetic of the spartan cupboards in Rose Frain’s installation This Time in History, What Escapes / Afghanistan currently on show at Edinburgh’s Summerhall, that catches at the heart. Lockers at the corridor end of the old veterinary college building are stocked with minimal provisions – the barest rations a human being needs in order to survive. Sanitised, shrink and foil-wrapped, these are official meal packs provided by the British Armed Forces to their soldiers in the field of war.

Yet, the factual labels on the boxes and packets tell an emotional story of humanity, individuality, revealing also the complexity and diversity of British identit(ies) in the wake of our, more often than not, unacknowledged Imperial past. 12 Hour Food Pack (Menu 7), for example, is suitable for those of Sikh/Hindu religion, while Menu 6 is designed for vegetarians. Individual food sachets are labelled with British staples “Chicken Jalfrezi” or “Rogan Josh”, as well as “Sausage and Wedges”, bringing warmth and humour, as well as a serious and timely reminder that Britain is ethnically and religiously diverse.

In contrast, beauty, abundance, and riches from the earth are invoked at the outset to Frain’s installation in lines from Peter Levi’s 1972 Travels in Afghanistan with Bruce Chatwin. The image of waking “to a square of window full of blue sky”, before breakfasting upon “apricots fresh from the tree” stays with us and serves as a sharp two-pronged reminder of the fecundity of the middle eastern lands so often represented as war-torn, devastated, barren and dusty, as well as the global capitalist geopolitics regarding natural resources. 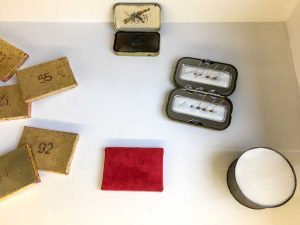 field – that country being the supplier of much of the world’s heroin habit – reinforce the co-dependant and problematic relationship of trade between the West and non-European countries. A vivid, almost painfully visceral materiality balances the artist’s evident in-depth political knowledge. The fragility of human life is suggested by a hand-warmer, the comfort of its soft textile interior redundant now it has been pierced with rows of sewing needles, their puncture holes dark like track marks on skin. A small representation of an AK-47 rifle – the recognisable world-wide symbol of power and weapon of resistance – is embossed like a bruise on the upper lid of a palm-sized ink stamp.

The relationship between the body and the artwork, their scale and the importance in both the aesthetics and politics are in evidence throughout the installation. Placed high on the wall in the position of a 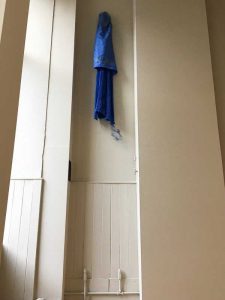 crucifix or icon, hangs a vivid ultramarine blue shroud. Immediate parallels to the tradition in Western painting of representing the Virgin Mary framed by folds of fabric coloured with pure (and nigh-priceless) lapis lazuli pigment are drawn. Yet dissonance is created as the eye moves upwards, the woven latticed eye-mask in the head covering reveal the garment to be an Afghan burka.

Further displacing our usual assumptions and angle-of-vision, Frain’s wall-based work Battalion must be viewed by stepping up onto a child’s plastic step. Regimented rows of palm-sized mirrors are pinned in a rectangular formation. Reminiscent of, but larger than identity tags, each plate is actually an emergency signalling mirror, a simple, but effective tool carried by soldiers throughout history. Here, they serve to present the viewer with a fragmented, sliding version of their own image, identity and surroundings.

There is never one single, easy answer or point-of-view in these displays; the artist seems to be asking us to acknowledge that our histories are intertwined and complex. We are co-dependant, equally responsible for our custodianship of the earth and its resources, whether based in the East or the West. Yet, in taking the time to absorb, inhale the void, as well as value the solid matter, we may yet be able to contribute to making a change to our own Time in History.