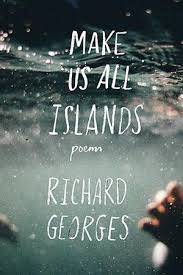 Trinidadian poet Richard Georges dispels the myth of the Caribbean as a modern-day paradise in his debut collection by invoking the ghosts and shipwrecks of his native islands in a sequence of darkly foreboding poems.

The opening poem “Griot” sets the tone with its description of the voyage of the enslaved Abednego across the Atlantic from West Africa. The Griot is a storyteller/poet, and Abednego’s poem is a powerful testimony to dead and drowned slaves, for whom he speaks;

for the speechless,
to grip the stem of the bone and coral sceptre,
to be mounted, to sing light into the bleakness.

This poem contains an echo of the ongoing civil rights campaign in the USA;

In slav’ry days, the black man’s life count for nothing

The persistent theme is one of survival against the privations of enslavement, as evidenced by some of the figures portrayed – Ungobo, rescued from a Spanish slave ship in “In The Moment Freedom Comes”, the unnamed fisherman in his battered boat who appears several times as the servant of the seas who;

measures his life out on
in pounds of iron-eyed grouper.

The poem ‘Redemption’ features the ‘cocolo’, the dark-skinned outsider of the Spanish-speaking Caribbean, feeling a sense of exile through generations of forebears as he stands on a ship coming into harbour, greeted by birds;

and yet cannot touch the times before his arrival at this place in space, or in time, remembering at the end;

This final line from the poem hints at the cost of such survival: an enforced break with the past, with the poet’s attempts to trace the story of his ancestors before they were plucked from their African homelands and thwarted by the obscurity of history.

The spirit of Derek Walcott and his language of the seas appears throughout the collection, notably in Georges’ quote from Walcott’s poem “The Sea Is History”. The poems here contain strong influences from Walcott’s exploration of the journey into slavery and liberation in his Homeresque masterwork ‘Omeros’, but Georges has a voice all his own, most evident in the five-poem sequence “The Heavy Anchor” – a title possibly borrowed from the Walcott quote. This sequence explores the sea and the shore through the eyes of several people, some named (his grandfather, and a survivor of a schooner shipwrecked off the coast of the Dominican Republic in 1926), others unnameable. For the poet, all ships travel with Africa in their sails, regardless of the seas they traverse;

the sails billow with Saharan winds,
full of the withering sigh of history
the rotting husks of shadowy hulks
mark their place on the horizon.

This collection exists at both ends of a momentous journey; the voyage across the Atlantic and across time which brought Georges to the place he now occupies. The space between his starting point and the end is filled  by the sea, awash with bodies and the carcasses of ships caught in storms or foundered on reefs. The poet maps this journey in the final poem “Oceans” where he tries

to hold the ocean
In my hands, in a glass

The ocean is a universe.
An abyss consuming even light in its depth.

At the heart of Georges’ understanding of his place in things can be found in the lines;

I map Africa. America
Europe. Asia. Continents like
opposing parentheses enclosing nothing
except the histories of too many people.

all of this is only water.

Georges’ quest for identity and a place in his own timeline is beautifully rendered below a warm sun and the sound of the ocean – but as all sailors know, a tempest, literal or figurative, is never far away. At the emotional core of this collection is the poet’s own quiet rage against a storm which has passed, but whose devastation continues to be felt across the centuries. Highly recommended.