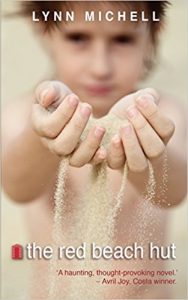 In a political climate where homophobia is a symptom of the backlash against tolerance, aided and abetted by populist and right-wing movements across the globe, the publication of The Red Beach Hut raises important questions about society’s misinterpretations of homosexuality. But Michell’s lightness of touch and her ability to get under the skin of her characters ensures against any of her fiction presenting itself as overtly polemical.

Lynn Michell’s previous novel, Run, Alice, Run (2015), explores the invisibility of the middle-aged woman and the damaging effect of patriarchy upon the female ego. In The Red Beach Hut, the protagonist’s problem is not invisibility; quite the reverse: Abbott feels highly visible, in a world where he would like to melt into anonymity.

Abbott is on the run from an unknown computer hacker who is terrorising him. He risks losing his job, reputation and even his freedom. He decides to take refuge for a few days in a comfortable and well-equipped beach hut left to him in his aunt’s will, in order to plan his next move.

Enter an unwelcome addition to his chaotic and anxious existence: Neville, a lonely young boy whose daily routine involves a walk along the beach and who craves a friend. Neville refuses to be repulsed by Abbott’s efforts to keep the child at bay and gradually, they develop a friendship that threatens to endanger them both.

Abbott knows that his reluctant association with the boy is being scrutinised by the prying eyes of the reactionary couple in the hut next door. From the first pages of this novel, Michell sets up an atmosphere of such convincing threat that the reader’s expectations are on red alert.

Her handling of the characters, their internal worlds and dialogue are beautifully drawn; especially delicate is her portrayal of Neville, a vulnerable and anxious little boy whose childhood innocence has been arrested by the brutal realities of adult life, but who longs for someone to trust.

‘I saw you from the steps…what are you doing?’

‘Been mending a small hole. She might be ship shape now.’

‘Fit for the water.’

‘Wow. Are you going to take her out?’

The boy took a sharp breath in. ‘Wow!’ he said again.

His eyes moved appreciatively over the neat shape, the white paint, the oars. Then he raised his face to the man where longing vied with hesitation. ‘I’ve never been in a boat.’

The boy looked at the man and the man looked at the boy. Neither spoke. The unspoken plea hovered between them while each breathed in and out and waited.

Say no. Say the boat’s broken. Say you don’t have life jackets. Say it’s getting dark.

The colour imagery in the novel acts on the reader too. Red is a colour of action and of danger. But this particular beach hut symbolises the womb: a place of nurture. The white beach hut occupied by the narrow-minded couple next door reflects their notions of themselves as ‘pure’, British nationals defending their interests against incomers, especially people of colour. Their tabloid-driven fear of paedophilia, combined with a twisted desire to see the worst in everyone around them ramps up the tension in a scenario already fraught with foreboding. Later in the story, the green boat further offshore acts as a catalyst for bonding between man and boy; green being a colour that evokes nature and harmony.

Michell conjures the atmosphere of a deserted seaside town, with its rain-soaked beach and drab promenade devoid of holiday-makers, but the beach becomes a kind of spiritual sanctuary for the new friends. A beach is the ultimate marginal land; this beach is inhabited by two characters on the margins of society, in danger of being engulfed by forces more powerful than them.