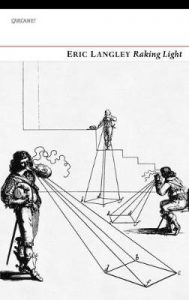 Eric Langley works as a lecturer at UCL, specialising in Shakespeare and Renaissance literature. Although he has had previous publications (his work has appeared in New Poetries VI, Blackbox Manifold, and PN Review), Raking Light is his debut poetry collection. This collection is a fascinating work that pays close attention to the endless possibilities of expression.

The poetry in Raking Light is close, careful, and deliberate. Langley has taken inspiration from the literal act of raking light, in which a beam of light is shone (often obliquely) upon an image to reveal its texture and detail – a technique linked to art and photography. He has taken this idea and applied it to language, taking words and exposing them beyond their common meanings, in a way that seems effortless. Through reflection and deliberation, the poet plays with communication and miscommunication, combining an array of ideas and images into his works. In an interview with Sean Robinson for the podcast Lessons from the School of Night, Langley discusses how he learned “a way of reading poetry that was not necessarily all about discovering authorial intent”. Raking Light embodies such an approach as Langley draws his readers’ attention away from the search for authorial intent and towards the syntax and imagery as it presents itself in the moment. One must let associations and ideas grow as they explore each word and image.

The above quoted “{{du|he|tao}}”, for example, encompasses a range of imagery such as musical, scientific/medical, natural and bodily:

Yet the poem does not feel disjointed or overrun with images, but reads as a composition of many voices and ideas. Each of the poem’s eight stanzas open with an epigraph alongside them – perhaps added to clarify meaning, yet at times, may blur it:

The epigraphs could in fact be read as a separate poem altogether. It is at moments like these in the collection that you should remind yourself to not ponder too long on the question of authorial intent.

Not only does Langley expose communication, imagery and expression through the meaning of words, he touches upon these themes through sound. When reading the collection, it feels necessary to read many of the poems aloud. In “{{du|he|tao}}”, there is repeated use of alliteration and onomatopoeic words – “So slip your keen rostrum/through my outer wall:/tap tap, rat-a-tat. […] That should flick the trips/turn tricks, click clicks.” This extends to the entire collection, as Langley not only illuminates the images born out of particular expression, but also the way in which sound contributes to/distorts that meaning. The pinyin of the title “{{du|he|tao}}” demonstrates this. Such a phrase could have various meanings, depending upon its pronunciation. For example, ‘hétao’ means ‘walnut’ and ‘hétào’ means ‘river bend’, including the specific Great Bend of the Yellow River in Northwestern China. In the Chinese language, even a slight mispronunciation can alter the entire meaning of a word.

Throughout the collection, especially the latter half, Langley experiments with form. The lines of his final poem are scored out and fade into almost nothing, seemingly embodying light distorting, changing, influencing what the eye can see; the work in progress.

Raking Light is a collection that you must read (and reread) with a relaxed and open mind; don’t search for meaning, but let it come to you. With every read, your imagination will be ignited by the collection’s profound images.