Visitors entering through the main foyer may well have their attention caught by the major Pictish cross-slab, the St Madoes Stone, or by the delicately embroidered butterflies in glass cases, before they notice the unexpected large black steel arachnid on the wall above eye level. This is placed above the entrance to the Louise Bourgeois exhibition and once spotted it, and its illuminated shadow, hold the attention hypnotically.

On entering the exhibition its much larger sister is seen, placed to good effect at the end of the gallery. The significance of the spider motif – protective, threatening, industrious – in Bourgeois’ work is well recognized, but the opportunity to view this large work at close hand reveals the importance of her treatment of materials. The spider’s body is not so much organic as industrial, a giant spindle holding a marble/granite egg. The silver nitrate patina applied to the bronze creates textural contrasts that seem to shift between the organic and the manufactured. 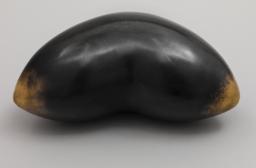 This awareness of patina is seen too in the smaller work “Tits”, where the contrast of black and polished surfaces gives just enough, and not too much, reference to the line between breast and nipple. The work is also phallic; ambiguity is thus maintained. The same male/female conjunction is found in the small bronze “Fallen Woman”, a female face attached to a phallic, limbless form, and the disembodied “Eyes” have a soft, fleshy appearance that belies the hardness of the pink marble they are carved from. While the immediate impact of Bourgeois’ powerful imagery is seen in the larger works, these small works are equally compelling. 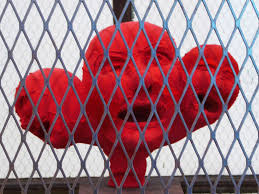 Further material explorations are seen in the fabric pieces. Created from clothing, “Couple 1” conjoins two forms, apparently male and female, whose anonymous, faceless shapes are suspended in anembrace; “Cell XIV (Portrait)” presents a red fabric head with three faces, imprisoned or guarded in a metal cage like the spider with the egg earlier.

While these sculptural works are multilayered in meaning and in their use of materials, the works on paper seem less so. There are two series on display here, a collection of twelve woodcuts based on the idea of the spiral, and the 20-page series “10am is when you come to me” representing the relationship between Bourgeois and her assistant Jerry Gorovoy. While these form a useful background to the biography and the symbolism of the sculptures, their impact seems somewhat dependent on the sculptures rather than their existing as independent works in their own right.

The exhibition as a whole gives a strong overview of the artist’s ability to address a multiplicity of themes using a range of different media. The strongest impressions are left by the material contrasts, and the intimacy of this venue allows the viewer to approach the works closely, in order to see those contrasts to best advantage.