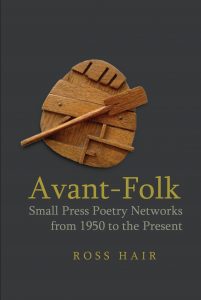 It’s a pity Ross Hair’s Avant-Folk is aimed at the academic market-place – pricing it off the bookshelves for most of us – as there’s so much of interest and relevance to Scottish writers and readers. Hair examines the inter-connections and shared sensibilities of poet-artists including Ian Hamilton Finlay, Thomas A. Clark, Lorine Niedecker, Simon Cutts and Jonathan Williams, exploring issues of creative exchange, aesthetics, publishing values, and relationship to place and to past.

A strong theme throughout the book is how to sustain a sense of “creative community”, particularly when living and writing in remote areas.  As Hair identifies, loose-knit transatlantic communities of poet-artist-publishers grew from the late 1950s, sustained largely through shared work and correspondence. Niedecker, for example, was widely published by small British poetry presses although she lived in relatively rural isolation in Wisconsin; and Williams felt that he shared a cultural heritage with Ian Hamilton Finlay although they lived on different sides of the Atlantic. Small presses such as The Jargon Society, Wild Hawthorn Press, and Tarasque Press were established in an “autonomous elsewhere space” which enabled this flourishing of international exchange.

Despite strong elements of connection between these kindred spirits, they valued informality, having no specific manifesto or “movement” as such. However, their work emerged in opposition to current trends, such as poetry of anguished self-expression and perceived intellectual pretensions. Jessie McGuffie and Finlay set up Wild Hawthorn Press to resist what they saw as the “insular nationalism and parochialism of the poetry associated with the Scottish Renaissance”. Similarly, Williams, himself a product of Olson’s Black Mountain College, “predominantly a male affair”, set out to undermine the hyper-masculine, heteronormative culture of that institution.

Among their shared interests was a merging of vernacular, demotic “folk speech” with modernist, avant-garde practices. The “avant-garde” tag is a little ironic, as Hair points out, given that many of the poets so-labelled looked to traditional folk and craft motifs, to pastoral themes and ballads, and had a strong regard for simplicity and calm. This translated into works which aimed to allow places and materials to speak for themselves, without judgement. As Clark reflects in his prose poem, “In Praise of Walking”: “‘Everything we meet is equally important and unimportant’” . Concrete and lyrical poems provided the Avant-Folk poets with different capacities to conflate topography, typography and topology in “aggregating” the construction of place. With an integrity of form and content typical of Avant-Folk poets, Cutts’ A History of the Airfields of Lincolnshire records, in one-word poems, how human presence has marked the landscape. As Hair notes: “The physical properties of the page, the placement of text, binding, the colour of type, and cover material all serve to suggest specific horticultural features of the topographies they evoke”.

Although high design and production qualities were valued over commodification for the mass market, book-making techniques used were most often accessible, from mimeographed pages to sewn bindings. There are interesting parallels between the ways in which technological developments affected the output of poetry in the 196Os and now – mimeographed publications proliferated then as online poetry sites do now.  Finlay, for one, did not appreciate the profusion of concrete poetry and anthologies which appeared then, enabled by the ease of self-publishing.

With a couple of notable exceptions, Avant-Folk is dominated by male voices, leaving me wanting to know more about the thoughts and contributions of Jessie McGuffie, Laurie Clark, Sue Finlay and others. Nonetheless, Avant-Folk is extremely well researched, rich in detail, thought-provoking and highly readable.  Borrow it if you can!