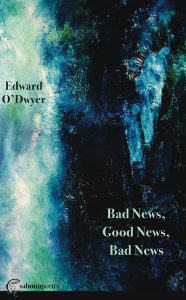 life has become a postman
each day dropping
more envelopes of bad news
through the letter box
on which the name and address
are never not yours.

Bad News Good News Bad News is a contemporary poetry collection from Edward O’Dwyer all about contemporary living ‒ specifically, everything that’s wrong with it. O’Dwyer’s poetry focuses on the unrelenting pace of modern life: how every reprieve is followed, as the title suggests, by yet another wave of misfortune. He writes about the vapidity characterising contemporary society and, of course, about the struggle to connect with others, and find oneself, especially in a world dominated by online communication technology and social media.

These are topics which have concerned many a writer in recent years; fortunately, O’Dwyer tackles them with wit and creativity. For example, he critiques our empty, consumerist culture in biting lines where people scramble to show off their “emptiness” “like salaries or new cars”, a clever parody of our pathological need to display idealised versions of our lives and our material wealth for everyone to see:

It was all the neighbours could talk about,
comparing the gaping voids of their souls…
On Facebook, his friends
were all posting updates about their emptiness. (“His”)

Armed with puns, slang and pop culture references, O’Dwyer addresses the wasted potential of our lives, that sense of dissatisfaction that pervades so much of society today. In “A Man About Town”, he offers a sympathetic glimpse into the life of a man on benefits, his feelings of worthlessness and guilt at having to live off government handouts:

You realise the painful truth
you’ve been trying for years now to articulate;
that your life has become a series of minor inconveniences
to approximately a thousand people,
none of whom you’ve known.

Yet this same man feels powerless to change his situation in a world of late-stage Capitalism where finding work is sometimes simply impossible: “But you’ve wanted all your life to do your bit,/and that’s still all you want, and you protest this silently”. The man’s disappointment in a life which – despite his college education – has yielded none of the promises of his youth, is surmised by a familiar icon of modern pop culture:

a McDonald’s cheeseburger…
nothing in it of the succulent, voluptuousness
of the one in the picture above the counter, the burger
you thought you were buying.

Likewise, the poem “Urine” presents us with the entire life of a person who is now old and wasting away in a hospital bed, their life reduced to human refuse: “until the last of it is pissed away,/the final moments shaken off”. The frequent use of the phrase “you’re in” ‒ whose meaning encompasses both being in trouble and having with a chance with a girl; aside from offering a pun, it serves to suggest that this person has lived their life falling into one set of circumstances and then the next, enjoying only an illusion of choice but really playing a passive role in their own life.

Other poems like “What the Flowers Say” focus on the failed potential of relationships. What was presumably supposed to be a loving gesture – a gift of flowers ‒ is instead marred by the giver carelessly leaving the price tag on, thus indicating the rote gestures that characterises this relationship:

Maybe flowers don’t say anything,
or they say exactly what they should, she thinks.
These say they are from Aldi, worth €1.99.

Once again, the use of a familiar brand name makes it abundantly clear that it is this world, our world, that O’Dwyer is criticising. From the first poem to the end, “Credits”, O’Dwyer holds up a mirror to modern life and declares: this is it, then you die.