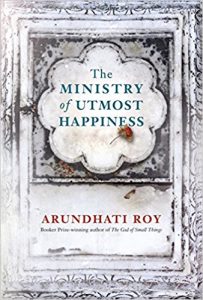 Of rain and rushing water, dense with coils of razor wire masquerading as weeds. The fish were machine guns with fins and barrels that ruddered through the swift current like mermaids’ tails, so you could not tell who they were really pointed at, and who would die when they were fired.

Perhaps the quotation above is as much like anything Arundhati Roy wrote in her lyrical, layered first novel The God of Small Things. Readers of that book will recall the river’s rich imagery, but that Booker-winner is now fully twenty years old. Roy has been far from idle in the intervening decades, having penned numerous works of non-fiction, and been widely politically active. We’d not expect her simply to recreate that book’s brilliance in this, her second novel.  In The Ministry of Utmost Happiness, she goes somewhere very different.

To call this a novel is in itself contentious. Unspooling a narrative in a review is rarely a good idea, though spiralling and occasionally chronologically challenging, the story itself coheres, and is readable to the point of being a page-turner. Structurally, the book is complex, sewing in numerous characters, poetry, reportage, Leonard Cohen lyrics, medical notes, Hindi and Urdu, varying typography, sets of questions with multiple choice answers, a rich primer in the subcontinent’s curses, and many more devices. India itself, already notoriously complex, predictably seethes throughout.

Unquestionably, this is hugely ambitious writing, and that fragmented narrative gives a great deal to the book’s texture that a more conventional telling could not. Slightly strangely, that disjointed writing really gears up a quarter of the way though the book, the first part of the tale being a fairly (structurally) straightforward introduction to one of the text’s most significant characters. Arguably the glorious Hijra (a female-identifying intersex person) Anjum’s complexities demanded to be written without further literary elaboration.

Already we have a gender politics in India – hot dhal indeed, but there is also the tracing of Partition’s legacy, and the vagaries of Nehru’s dynasty. Echoes of Afghanistan, Syria and Libya, and the repercussions of the Twin Towers are all here. As a strand of the story built around an already problematic petrochemical situation, I knew we were heading to Bhophal. Increasingly, the narrative focuses on the pain of Kashmir’s struggles – an area of particular research and passion for Roy.

All these are noble causes, worthy of both debate and publication, and yes, also of being part of the warp and weft of fiction. However, The Ministry of Utmost Happiness perhaps struggles to fulfil its admirable intent. There is always danger in threading political purpose, human rights or environmental activism, or any other great cause through fiction. Where does the need to raise awareness in the reader begin to cloy, and to undermine? In this case, it happens a little too often for comfort.  I cannot claim to be sufficiently knowledgeable about these problems in India, yet too regularly, I saw Roy’s overly didactic hand, and was aware that I was the non-Indian reader who should be told, in her need to both show and tell. I dread to think how the properly-informed reader from Delhi might feel. The excellent metaphor of the “Indo-Pak war” within a transgender body is ponderously explained, and Roy’s reader hardly required to be told of the mutilation of a politically-sensitive statue, “In some countries, some soldiers die twice”. These are but two instances of a too-regular habit.

We have waited so long for this, and if it is not the book many of us wanted, unquestionably, for all its faults, it is literature with moments of great beauty, haunting characters and most importantly, courage.  Perhaps her stories waited too long, contained so much passion and deserved more than one book. Hopefully Arundhati Roy will not wait another twenty years before writing more fiction.