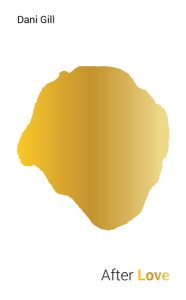 […] and when I enter the black grey waves,
bobbing and bouncing,
this emptiness inside me is the buoyancy,
it keeps me up.

Turbulent, cleansing, and uplifting. Dani Gill’s debut collection, After Love, is the textual equivalent of open water, purifying as it immerses. Serving as a kind of therapeutic act, the poet uses the collection to work through the ending of a long-term relationship. Purging herself of the grief, pain and tinges of guilt binding her to the past, the words on the page suggest a cleansing, not unlike the tide washing debris from the shore.

Water is a repeated motif throughout the collection. Poems such as “Blackrock”, “Surfacing” and “Weightless” feature the sea outright, while others contain images of rain and references to mermaids. Water imagery serves to unify Gill’s poetry; while the ocean may have been of great importance to the now separated couple, in the collection, it is a symbol which reminds us of what has been lost.

There is a physical landscape to Gill’s grief. The Irish suburb of Blackrock serves as the back drop to many of her poems. The significance of place is amplified during mourning. Memories of a love and life together are embedded in bricks and mortar. She recounts how difficult it was to encounter places that enshrined their love within its walls,

It was hard then to drive
past the house where we first
made love.

Gill traces her way through well-known streets and locations, demonstrating that even the comfort of the familiar can become a haunting spectre after a breakup.

As most people in long-term relationships do, Gill reveals how she began to define herself in terms of her partner. In the poem “Single” she opens up about her struggle with her newly single status, beginning with the sentence, “Without you, that is my definition.” This line foregrounds lack, and reveals how detrimental separation can be to our sense of who we are. It is not just a lover that is lost, but the narrator’s sense of self. Thus, the collection as a whole is as much about acknowledging loss as it is about finding herself.

As After Love progresses, we begin to see a process of healing. The home they would have bought and the ring she would have worn are nothing more than remnants of a previous life. The turning point of the collection comes in quite late, culminating in an emotional crescendo which peaks in “Leaving”. Here the poet bares her heart to us:

I wish for a clear glass box to step into and scream, scream and empty my lungs, show the redness of my throat.

The speaker does not seek privacy, she wants to be seen. In the next line of the poem quoted above, we read that “the private is our prison”, a justification for such a raw and ravaged display. Taking the time to give into grief is sometimes regarded as self-indulgent – we are encouraged to bottle up emotions, stuff them down, and lock them in a chest and throw the whole thing into the ocean. Gill does not subscribe to this notion; instead she sees the value of taking time to mourn, allowing herself time to feel and falter, but also to mend.

If this collection teaches us anything it is that sometimes we need to be selfish, to be unafraid to find ourselves lost. We need to understand that it’s fine, and indeed possible, to start again. There is life “after” in After Love, a “different conclusion” to draw, another love to be had.