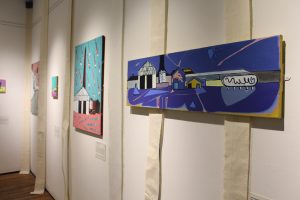 Nestled in a small makeshift studio, surrounded by the noise and bustle of a working factory, artist Nicola Wiltshire produced the series of paintings now on show at the Verdant Works. The paintings are a depiction of the people, places and activities hidden within the factory walls of Halley Stevensons, where she spent six months as artist in residence.

These brightly coloured works, which are hung at the same height around each side of the room, reflect the artist’s experience of her time spent in the factory and those whom she encountered there. The first painting shows the exterior of the building: an impersonal landscape, devoid of any people; a reflection that at this stage the factory was a faceless building and Nicola was yet to meet the workers within.

As you sweep around the room it is as if you are following Nicola’s timeline. With each new painting the exterior begins to fade away and interior scenes emerge. With this comes the arrival of figures. At first the figures are small, as if observed from a distance, and remain uninterrupted from their daily tasks.  In Pattern Forklift a worker is busy driving his vehicle and Sticky Feet shows another figure focused on the work at hand, his back to the viewer.

As the paintings progress it becomes apparent that as time passed Nicola and the workers became more familiar with each other. Just as the artist was interested in observing the workers’ labour, they too became intrigued by the artist’s work. Nicola noted that the workers would 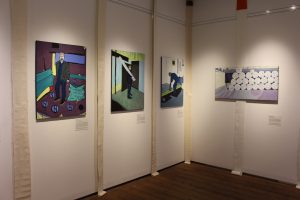 visit her in her studio, unafraid to give feedback on her paintings. In many of the later canvases the figures become the central focus of the scene. Painted at a much larger scale than before, these men are static, posing, with their faces looking straight out at the viewer. These paintings capture the personalities of the men and the small descriptions below each canvas reveal the conversations that took place between artist and workers.

This exhibition is a very tactile one and the artist is keen to include the viewer in her process. Along with small descriptions detailing her creative thoughts as she went about painting, she has also created a plinth in the centre of the room which contains strips of canvas fabric. These samples are cut offs from the same material she has used for her canvases and she invites the viewer to feel them. Not only does the factory serve as subject matter, but these fabrics were made inside those very walls. Every part of these paintings reflects the people and place she paints. 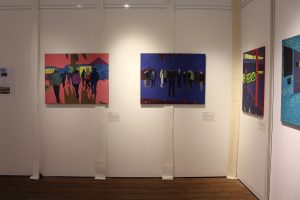 Every artist is allowed to take artistic licence and for Nicola this was colour. In an aesthetic sense her paintings are in no way realistic. Bold colours penetrate her canvases: pinks and turquoises, yellows and purples, when in actual fact the factory is quite grey. The source of these colours comes from the fabrics being made and the skips lying around the building. She has exaggerated them in a way which captures the unseen playfulness, movement and activity that takes place inside the building.

In her final painting, Nicola shows the men walking off after the end of a Friday shift. The group have their backs to the viewer and it seems fitting that the exhibition ends on such a scene, reflecting that for these workers their time in the factory continues but for the artist, and in fact the viewer, our time of observation is over.