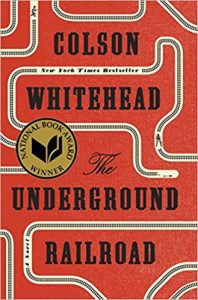 I feel the need to start this review by making a confession. Since its publication in 2016, Colson Whitehead’s latest novel, The Underground Railroad, has been crowned with some of the most prestigious literary awards: National Book Award for Fiction 2016, The Pulitzer Prize for Fiction 2017, even, oddly enough, the Arthur C. Clarke Award 2017 for Science Fiction, as well as reaching The Man Booker Prize 2017’s longlist, its most recent addition to its already exhaustive list of nominations. Amid this unbridled adulation, the confession goes, the book’s “skin” got lost on me, dressed in accolades and stamped medals, and its themes soaked in undeserved irrelevance. Almost a million copies have already been sold, an apparent surge of interest in America’s founding history.

Or was it because of the accolades?

The novel certainly frames a critical period when not only the darkest side of America becomes apparent, but of humanity as well. Cora is the focal character, a third-generation black slave girl whose tribulations on a plantation in Georgia are like her mother’s (Mabel) and her grandmother’s (Ajarry), and like pretty much any black slave’s in and around the early 1800s. Structurally, this Aristotelian beginning is also identical to most slave narratives. One is made to think that the African-American author tries to avoid any such potential criticism on his derivative beginning by explicitly acknowledging this fact.

“A plantation was a plantation; one might think one’s misfortunes distinct, but the true horror lay in their universality.”

When the heroine cedes to Caesar’s promptings to escape, using the existing underground railroad, and they start their journey northbound, the slave-catcher Arnold Ridgeway appears, and ceaselessly hunts them as they strive for their freedom, each adhering to their own ideologies. The antagonist says, “I’m a notion of order. The slave that disappears – it’s a notion. Too. Of hope.” The reader is finally awakened from a seventy-pages long slumber and takes up his due active role. What is the Underground Railroad, really?

“The Underground Railroad,” a contemporary Historical Marker in Ohio reads, “was neither underground nor a railroad, but a system of loosely connected safe havens where those escaping the brutal conditions of slavery were sheltered, fed, clothed, nursed, concealed, disguised, and instructed during their journey to freedom.” This is where Whitehead’s brilliance supposedly lies, turning the imaginary into the concrete. But in this case, isn’t the “real” metaphor stronger than Whitehead’s imagined reifying of it? Doesn’t the metaphor as we know it magnificently succeed in encapsulating the transcendental spirit of those struggling generations – the toil, the faith, the dreams? Isn’t it not so much about the physicality of it, but the meta- that precedes it? Why give the Underground Railroad such a mundane appearance? As Kathryn Schulz suggests: “The great virtue of a figurative railroad is that, when someone needs it – and someone always needs it – we don’t have to build it. We are it, if we choose.”

The many flashbacks and flashforwards into the memories and dreams of the multiple characters fragment the otherwise monotonous linear narrative, although the all-round third-person narrator is insistent on its measured tonal cadence, even in the most subliminal moments. As Jay Nordlinger writes regarding Whitehead’s “modus operandi”, “Momentous events happen too abruptly, even nonchalantly … It’s wham, bam, thank you, ma’am.”

My confession ends with an admission of my elevated expectations for the novel (was it the medals?), which, to my own disappointment, followed a plummeting course as the story quickly drew to an end.

Colson Whitehead is indeed a talented writer and The Underground Railroad is written in an impeccably bright and simple prose. The text reads easily, as if almost in deliberate contrast to what it stands for, to the pain and woe it stores within itself. Originality and artistic breath, though, is what it needs.