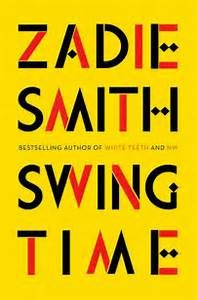 Zadie Smith is no stranger to a literary award shortlist, but her fifth novel, Swing Time, is a particularly intriguing nominee for this year’s Man Booker Prize.

Skilfully tackling complex issues of race, class and identity, Swing Time firstly gives us an honest and engaging insight into these subjects through the eyes of a seven-year-old girl. Growing up in a London housing estate, our unnamed narrator meets rebellious, new best friend, Tracy, at a local dance class. As two mixed-race, young girls – “Our shade of brown was exactly the same” – the pair share a dream of becoming professional dancers. Through a first person narrative, we follow the girls through their childhood years and eventually into the challenges of adulthood.

Despite what is often a one-sided friendship, the narrator idolises Tracey: “No, I really didn’t care what my parents thought of me any longer. Only my friend’s judgement counted, now more than ever, and sensing this, I suspect, more and more she chose to withhold it.” Over time, the girls’ friendship begins to unravel and complex family lives are unfurled as we get to know our narrator’s fiercely independent, feminist mother and passive father, alongside Tracey’s pushy mother and convict father. But turbulent relationships are key to the novel’s narrative. It’s a story of friendship and family, love and animosity, reliance and independence. Our narrator, in particular, struggles with her own identity and relationships with others, from a very early age:

And I became fixated, too, upon Katharine Hepburn’s famous Fred and Ginger theory: he gives her class, she gives him sex. Was this a general rule? Did all friendships – all relations – involve this discreet and mysterious exchange of qualities, this exchange of power? Did it extend to peoples and nations or was it a thing that happened only between individuals?

But she’s not alone, every character battles with issues of identity in some form. From the strained relationship of our narrator’s unaspiring father and dynamic mother, to the power-hungry superstar Aimee, and the overtly-sexual, self-assured Tracey.

Eventually working for Aimee, a celebrity powerhouse, our narrator hides in her outlandish world, disguising the lack of direction in her own life, which doesn’t go unnoticed by her critical mother: “People come from somewhere, they have roots – you’ve let this woman pull yours right out of the ground.” When she travels to West Africa with Aimee for charitable initiatives, even then the narrator struggles to find a sense of self. She finds many parallels between her childhood council estate and the deprived village, yet still doesn’t feel a sense of belonging. Places and time are pivotal as we continually travel between London, New York and West Africa, and the narrative shifts between past and present.

References to films and music transport the reader through the eras of dance, from Astaire and Rogers to Michael Jackson. Often, a black and white film or a musical score is the catalyst for our narrator to delve deeper into the novel’s recurring themes: “The orchestra played the opening bars of a song. I recognised it as soon as I heard it…and at once felt a panic…and remembered, too, how I’d felt the first time I saw it.”

Ultimately, Swing Time is a story of transformation and change. Characters explore different paths despite the challenges they may face. They choose to better themselves, and they find comfort and strength in their personal discoveries. Except for our narrator. Despite a fairly lengthy word count, she never quite accomplishes the change that we see in other characters, which results in a slightly disappointing end. Although she recognises that others find their solace, the final chapters suggest that she’s still somewhat naïve, hasn’t learnt from life’s many lessons, remaining lost in her pursuit of identity and belonging.