A man gets up one morning and he finally leaves his family. They need him now more than ever. This is the fear that he wakes up with every morning.

There is the fear that he wakes up with every morning,

that every morning he will wake up

and he will see

There is the fear that he wakes up with every morning that he is still here. Won’t ever go back.

This too is a fear he wakes up with and

There is the fear that he will forget,

There is a kind of tree blossom there

He knows he will forget.

So he gets up one morning and he leaves his family.

He leaves his family and he walks down the stairs of a tenement building.

When it comes to the good old Scottish tenement close,
the rear-view mirror of historic recollection always has a
rosy tint to it. It’s a staple of Scottish urban folklore, for
instance, that no close door was ever locked against a
neighbour.

How to say hello.

How to say hello in a way that

It is early and he does not even know where these people work.

It is early and his family are sleeping, so he goes down the stairs. He steps into the street. It is not so early that it should still be dark. But it is still dark.

the street lights shine through his curtains when he can’t sleep and it is still dark but it is already morning.

It is his street. He walks down the street, the hill, and down to the city and

To go and get the smell of early morning bread?

They pay to drink coffee. Out of paper cups.

He walks right down the middle of a road and he might as well raise his hands and scream    “I am crazy!      I know I am crazy!”

No one notices him.

He gets up another morning and he leaves his family.

He walks away and he leaves them sleeping. He walks down the stairs of his tenement, down his street, down the hill that leads to his city and its sickly, orange glow. And no one looks at him because it is early, no one even sees where he might be going, what he might do, in the state of mind that he is in

He knew people who looked.

The dark morning is a refuge of sorts

Is it safe in the early morning, in the darkness and the rain?

While no one is looking?

But his small rucksack is heavy. It too is wet in the rain.

He walks down the street. He walks right down the middle of the street, in his stupidly, woefully thin coat, and the nothing underneath it, the absolute nothing it conceals and

A whole formed by identical separate parts. Would it look
better all smoothed into one cohesive mass or do the
corroded crevices add to the interest?
The individual layers are lacking in definition and hence
of less interest.

It is the message not the image which is of interest.

He walks up to it and it is an art gallery and he remembers. Art. Such things.

He thinks of pictures and words and shapes and colours and explosions He thinks of songs and rhymes and sculpture and music and a roar of noise. He thinks of dreams and drama and messages and ideas. He thinks of voices.

He thinks of people’s voices being heard.

He knows, and when it comes to the important stuff, he needs to remember

He sees a sign. So it is time to act. 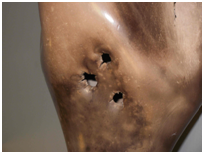 Gallery of Modern Art
He sits down on stone steps, lets damp seep into his trousers. They are thin and he does not care and they are stretched at the seams, but it does not matter.

They will not let him in the building for another three hours.

The part which is folded back on the bottom left still
shows the same ribbed markings forming a pictorial link
and identifying it as a whole rather than two separate
pieces.

This is very subtle, but there is something there which
could be developed.  It just needs some cerebral soak time
to find it.

Note – the hole was not made by a bullet.

For the creative dissertation of the MLITT, Stephen submitted the first section of an experimental, fragmented novel based loosely around the Japanese art of Kintsugi. This artistic philosophy treats breakage and repair as part of the history of an object, rather than as something to conceal which, lends itself to exploring issues to do with mental health and belonging. Cracked, part two is one fragment from this novel in progress.