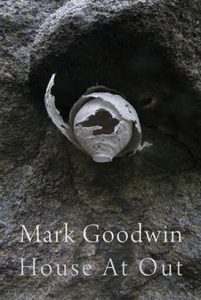 If there was ever a poetry book that felt like a workout, this would be it. I don’t mean workout in the sense of a laborious or stressful task, but as a highly stimulating read. Mark Goodwin’s House At Out exercises the mind in every sense of the word.

Mark Goodwin is a poet and self-described sound-artist from Leicestershire interested not only in the meaning and aesthetics of words but also in its sound, reading and performance. Many of his poems, including the pieces in this collection can be enhanced by a digital sound album, accessed online. House At Out contains new and old work. There is never a dull moment. Each poem offers something unique and refreshing.

The lack of punctuation, particularly when it is used to create pauses is immediately noticeable. Instead, Goodwin opts for large spaces between or within words throughout the book. To someone, like myself, who is not acquainted with his work, this might at first seem like a ploy or gimmick; but it is far from that. Its strategic use continually challenges the reader’s expectations: just when you think you have Goodwin all figured out, and think you can anticipate what is coming next, he seems to smile as if to say, “no, not quite”. He stays a step or two ahead of the reader every time. His technique creates dramatic pauses, altering the meanings of words or to conjuring or emphasising a particular effect. Consider “eyes sleep   ily & speed   ily shadow…”; the spacing alters the pacing and directs the way it should be read. The “sleep” and “speed” with the recurrence of “ily” renders a sound echo and mimics how those actions are perfeormed . In other cases this spacing is used to underline the truly performative nature of his words. Unquestionably much of the work should be read aloud to appreciate the poetry’s sonic qualities, most particularly in pieces such as “Bhaornme”: “fragments/ of fractual love   tiny homes within a home   home’s vast   vast’s/home…”

Goodwin’s poetry draws attention to itself by making the reader pause, re-read and re-consider more than most. This is poetry which, at its heart, is an acute observation of words, syntax, word patterns, cadences and rhythms. A dynamic example of this is in “II Moving Conversions” from the poem “Moving”.

In work that so heavily dependent on how to render sound on the page, it is important not to forget about Goodwin’s beautiful natural imagery in poems like “Flattened Shop” where “a bird’s   sweet painted   flight on tin/ cherry blossom & far   orange sun…”. Sometimes, Goodwin’s imagery is beautifully obscure; his skill as a nature writer (indeed he spends much of his time outdoors as a walker, climber and “experiencer of place”) sheds light on natural landscapes in a unique and sensitive light.

Here is poet who knows the role of word play, rhythm and sounds better than most. House At Out exercises the mind and makes the reader work by not giving away anything easily. The dynamic quality of Goodwin’s work means it lends itself to reading, performing and listening repeatedly.