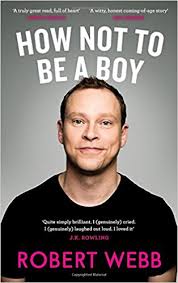 “It remains a sexist world and I can’t change it for my daughters the way I would like to. But I can try and improve the situation one man at a time. Starting with me.”

Robert Webb has chosen to bare his soul with this autobiographical debut. He doesn’t just want to tell people where he came from, and what has happened to him in his first forty three years being Robert Webb, he wants to show you how his struggle with the social norm has resulted in him being plagued with issues of his own. Bloody hell you might initially think, but you would be wrong to do so. Let’s give him a chance.

Initially made famous through his comedy work on stage, screen and radio, generally written and performed alongside his creative partner, David Mitchell, I must confess to not having been much of a fan of Webb’s humour. It wasn’t as if I didn’t like him, his work just seemed to pass me by. Yet, even without having so much of an opinion about him, his writing hooked me from the first page: “If I get this right, Tess Rampling will definitely want to have sex with me.” Ok, interested. I logged on and found Peep Show. Ah I get it.

The book reads like Webb’s comedy: a lot of downplayed sarcasm and absurdity generally taken to its own unlikely conclusion. This style helps to avoid any excessive weightiness, even as he discusses subjects such as his struggles with depression, sexuality and the death of his beloved mother when he was seventeen. Webb succeeds in talking to his audience as opposed to down at us. The result is that reading this feels more like a discussion with a mate and, as such, the insights garnered from his experiences will surely resonate strongly with a contemporary audience.

How not to be a boy’s main premise is Webb’s development from childhood to manhood and the realisation that the programming given to him by society was all wrong. The book is split into two acts: the first regarding what is taught to ‘Boys’ and the second reflecting upon what ‘Men’ are supposed to be. Each is divided into chapters which have deliberately apocryphal titles relating to the issue Webb wishes to unpack, for example, “Boys Don’t Fall in Love (with other boys)” and “Men Are Good at Directions.” This works well as our preconceived notions are tapped into and then subsequently reversed within his argument.

The use of this structure starts the conversation regarding the issue of masculinity, in particular, the tide of misguided gender notions that our society sees, incorrectly, as normal. This is referred to in the book as “The Trick” and is further related to wider issues of gender by the  assertion that “Feminism is not about men versus women; it’s about men and women versus ‘The Trick’.” Wow. Didn’t expect that from one half of a famous comedy duo, did you?

And that is the strength of this book. It is far more than the sum of any expectations that could reasonably be asked of it. The book could conceivably be tossed aside given Webb’s status as a celebrity, but that would be a shame because it deserves to be taken seriously – if only for the care it takes in dealing with these most divisive and sensitive of subjects.

How Not To Be A Boy is wonderfully jaunty but retains enough critical bite and discernment. Webb succeeds in conveying a very personal journey that is widely empathetic. The book , most importantly, avoids becoming pompous and remains engaging throughout.

More to you there is young Master Webbington.