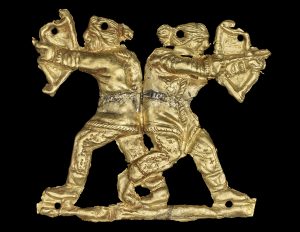 The Scythians were a group of nomadic tribes skilled in the art of mounted warfare who ruled the Siberian plains between 900 – 200 BC.  They left no settlements or records, but are mentioned in the histories of the Greeks, Assyrians and Persians.  Forgotten until recent times, their ferocious reputation lingered in the popular imagination for centuries.  When King Lear disowns Cordelia, Shakespeare compares her to the “barbarous Scythian”, and suggests they ate their children.

The exhibits come from a series of archeological excavations of high-status tombs. The Scythians were buried with everything they needed for the afterlife and permafrost preserved it all. However, with only the funerary best to go on, the exhibits appear rarefied and remote and it’s difficult to get a sense of everyday life. Often it is the quotidian that gives us some common ground to relate better to ancient civilisations.  Perhaps this is the reason, unusually, that a Museum volunteer greets visitors on entry with coins and small finds, that can be examined and handled.

A subtle soundscape plays throughout the exhibition. Wind whistling over the plains creates a chilling sense of being in a vast and hostile landscape. A recording of galloping horses, voices and yapping dogs breathes life into a display of saddlery. The sound of roaring tigers and howling wolves liberates these animals from the constraints of the highly stylized artwork that depict them.

Some of the exhibits get a little too close to the deceased for my comfort. On closer examination, what looks like a thick piece of old leather is in fact a piece of tattooed human skin. A teenage visitor exclaimed, “its gross and awesome at the same time,” while others also gasped in horror. Mummified male skulls give a grisly insight into the times. One man was brutally scalped.  Another man with a neat ginger moustache had several scars neatly stitched with silk thread.

A staggering array of artefacts accompanies the burials, including personal items like bone combs, colourful felt stockings, bronze mirrors, a false beard made of human hair, squirrel-skin coats and tall conical headdresses. Not surprisingly there are several Scythian bows. Small and lightweight, they could be fired repeatedly without adjustment giving the Scythians an advantage in battle. The arrowheads were cruelly crafted with a sharp spike on one side, so they couldn’t be pulled out of the body.  The Scythians drank wine, fermented horse milk and smoked hemp in a small wig-wam to contain the smoke. Little is known about their religious beliefs, and some of the artwork has been interpreted as depicting an afterlife.  It is surprising there are no fertility symbols or figurines, which often feature in early civilization displays.

The “animal art” gold jewellery set with semi-precious stones in the exhibition is bold, playful and exquisitely crafted. Real and imagined beasts and birds are depicted in contorted positions or interlocked in battles – a griffin sinks its teeth into a horse. Similar designs were used for the tattoos. Some of the jewellery bears a striking resemblance to Celtic art, but artistic links with other cultures are not fully explained. Some pieces look so pristine and modern that they could be mistaken for Art Deco but, incredibly, many are over 2,000 years old.

The British Museum has put this fierce yet sophisticated civilization back on the map. But some basic information about key elements of Scythian life is lacking. For example, domestic and family life, how they sourced and worked their gold and the practicalities of mounted warfare. It’s a tall order to tell it all, and the Museum is hosting a series of talks, films and conferences to accompany the exhibition, at an additional, and not inconsiderable cost.  However, visitors unable to attend further events may be left with more questions than answers, and an impression that the Museum went for the shiny and missed the mundane.