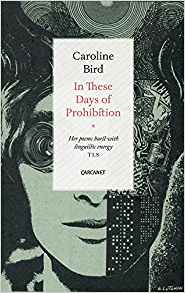 The poems in this, Bird’s fifth collection, explode on the page, bristling with a vision of sanity within madness, order within chaos. She has the ability to describe a tortured soul in a twenty-first century manner, bringing humour, contemporary idiom and irony into the work. The poems often sound like the poet is coming down – or up – from a drug trip; it’s not always clear if the drugs are legal.

Caroline Bird was born in 1986 and brought up in Leeds, before moving to London when she was 15. Her first collection, Looking Through Letterboxes, was published the following year. Since then she has published further poetry collections and written several plays. She also teaches poetry in schools and for the charities First Story and Second Sight.

The collection is divided into three parts, each with a line from other poets’ works. Part One opens with “A Surreal Joke”. The narrator is on a rehabilitation programme treating a cocaine addiction. During a therapy session,

My assigned counsellor told me I used
poetry to hide from myself, unhook
the ballast from my life; a floating ruse
of surreal jokes. He stole my notebook.
I said, they’re not jokes. He said, maybe try
to write the simple truth? I said, why?

Bird makes extensive use of metaphor in her poetry. She sets up scenarios that challenge accepted norms of reality. She is not afraid to tackle deviant sexuality. In Stephanie, the narrator is a patient in a psychiatric hospital. Another woman is admitted whom the narrator takes a fancy to:

In the title poem of the collection, “In these days of Prohibition”, forbidden alcohol is likened to infidelity. The poem centres on the risk of losing control, surrendering to indiscretion. Bird relishes pushing metaphor to its limit –

And even if, behind my ear, a magic button could revert
this whole place back to a billiard saloon, I’d still clink
in the basement of myself.

There are several prose poems included. “Beatification” tells of the narrator’s father, who takes up smoking crystal meth and becomes a gigolo at the age of one hundred and five. He asks his daughter to build a web site so that he can “advertise his wares”, which include, “Bondage. Water Sports. Sadomasochism”. When the daughter remonstrates with him about his age, she suddenly sees his persepctive – “’Which is all the more reason’”, I added, ‘not to waste another minute. Of course I’ll make you a website.’”

The poem plays on the paraphernalia of old age; the Stannah stairlift and Meals on Wheels, hilariously undercut by the drug-crazed sex antics of the father and his clients. Bird creates worlds that are surreally funny, while also demanding that through them we question conventionality.

Part Two of the collection features a challengingly surreal poem, “Ms Casanova on Life Support”. The narrator is the eponymous heroine pretending to be in a coma, surrounded by beautiful women who come to worship and bring her an assortment of gifts, most of which are completely inappropriate:

quince, baklava,
ostrich burgers, hand-crafted chocolates in trendy boxes.
Who is it all for? They’ll be bringing me kites next,
pogo sticks, BMXs. They’ve forgotten what a coma entails.

This poem might be a lesbian version of the Sleeping Beauty fairytale, but the narrator questions her fantasy of being adored. What if she were to wake up? How would she deal with all of her fans? Here, Bird confronts questions of monogamy versus polygamy in a playful yet profoundly haunting way.

Bird’s hyperreal forays into the self are an exhilarating experience, invoking the shock of the new in her audience.