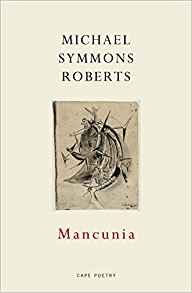 Lancashire-born Michael Symmons Roberts is a poet whose time has clearly come, confirmed by a string of recent awards, most notably for his 2013 collection Drysalter which garnered both the Forward and Costa awards. As an ex-pat Mancunian, I was especially looking forward to reading his latest collection, a thrillingly dark tour of my home city.

My initial concern with this collection was that its meaning and its reference points might be muted to non-Mancunians. I needn’t have worried – the Manchester of Symmons Roberts’ experience and imagination is a place even those who have never seen it would recognise. In the case of the scene-setting poem “Great Northern Diver”, the city is recognisable even from above, with its

A clue to what fuels the heart of the city emerges in the final line:

what keeps this city alive is you.

A parochial landscape of Manchester is painted in “A Mancunian Diorama”, which is presented as a dense panorama of prose-poetry set horizontally across two pages, a widescreen vista detailing city landmarks, both geographical and historical. Like a seedy tour guide, Symmons Roberts offers to

fix for you to come in here last thing when all the crowds have cleared although the weight of it can be too much to bear.

What is “too much to bear” is hinted at through images of poverty and inequality which the poet feeds into his visions elsewhere in the collection; the three thousand refugee children of “In Paradisum”, who

camp on flood-plains by the ship canal
or rather, have no tents, so sit down
among thistles and dock and nettles[,]

and in “Mancunian Miserere”, the

wide berth I gave that man-cocoon asleep on the steps[.]

Like all modern cities, Mancunia is a magnet to the dispossessed, the displaced and the disenfranchised, and Symmons Roberts’ eye captures this with characteristic Northern bluntness. The poet is also adept at finding other voices to tell his stories –”Tightrope Song” is sung by the tightrope and not its walker; the barfly in the eponymous poem is both real fly and euphemism; the billions of photographs discarded from our phones and hard drives exhibit themselves in “The Gallery of Deleted Portraits”. This is a cryptic Mancunia that is both familiar yet mysterious.

Thomas More’s sixteenth-century satire Utopia has inspired this poet’s work before, and “What’s Yours Is Mine” contains an epigraph from More; going on to describe sinister, unannounced visits to the homes of strangers whose occupants, from an archetypal communal version of Manchester rooted in Victorian times,

saw you straight,
and even so would give you everything.

The relationship between the real city and the imagined one is explored in several poems which consider its part in possible futures. In “A Mancunian Taxi-Driver Foresees His Death”, the poet alludes to a post-apocalyptic Arizona where his taxi-driver aims to go as the Earth faces its premature end, in order to

find the last fill-up on the planet,
drain the pump and power out into the wilderness
until the car coughs, then abandon it.

and even more surreally in “The Future of Books”, where the printed artefact becomes an unfamiliar object of curiosity, which

so mystifies our future selves
they fry it like black pudding, a salt and bitter
jus of atlas, sonnet, gossip, scripture[.]

The quartet of printed artefacts the poet refers to could be a loose summation of Symmons Roberts’ thematic preoccupations in this collection and his wider canon.

Whether or not you know Manchester, it has an undeniable allure, possibly rooted in its modern folklore of social history, music, soap opera and football. This beautifully balanced collection functions as a lyrical “Rough Guide” to the city, making strange sense of it and painting a dark picture of somewhere you may one day find yourself. I am sure I will be returning to Symmons Roberts’ Mancunia on a regular basis.