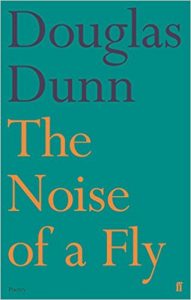 This poetry collection is Douglas Dunn’s first since 2001. Since then he has focused on editing poetry anthologies; The Noise of a Fly is an innovative return to form. Here we find work by a mature poet, sometimes painfully self-aware. As ever, Dunn casts new light on diverse subjects, whether environmental or cultural.

Douglas Dunn was born at Inchinan in Renfrewshire in 1942. He worked as a librarian before studying English at Hull University, eventually working in Hull Library under the supervision of Philip Larkin. He published his first poetry collection, Terry Street, in 1969. After a brief stay in the USA, he returned to Scotland as Professor of poetry at the University of St Andrews. Perhaps his best-known collection, Elegies, was written after the death of his first wife, Lesley Balfour, in 1981.

Many of the poems in this new collection are concerned with nature and gardens. Dunn takes time to observe the minutiae of insect life, birds and flowers in such a way as to make the reader slow down and search for the essence of these living things.

In “An Actor takes up Gardening”, the protagonist takes solace in the expedient of gardening to fill up the time not working. He is frequently “resting” and obliged to fill up his time nurturing

There is a bitter acceptance in these lines; the preponderance of experience over innocence.

Dunn also takes on themes of nationality, language and culture in the collection, notably in the long poem, “English, (A Scottish Essay)”. The poem reads as an apologia for his use of the English language rather than Scots, but it expands into a history and investigation of Scots writers’ use of language, questioning the ascendancy of one language over another: “…Nobody knows How Knox (or Shakespeare) spoke, just that they did, And wrote.”

In “An Alternative Map of Scotland”, Dunn recollects an incident from his childhood, when he and a friend, (“Sparrow Gray”), find the hideout of an old tramp in the kiln of an abandoned brickworks:

We went inside the kiln once he was gone.
Dusty sunbeams shot through holes in its roof.
Speug held his nose. It didn’t really stink.
The smell was old air, high temperatures
Of long ago trying to cool in the summer,
Maybe a scent of sleep, or whiff of dreams.

This poem evokes a time when homelessness meant moving on, drifting in search of shelter, work, food. But it is not nostalgic. The note that the tramp leaves on the kiln-wall illustrates the precariousness of life for those on the road:

There’s a good old soul in the first smallholding
Over the road, by the bridge. For sweeping.
And fixing a hinge on her outhouse door,
She gave me two boiled eggs, four buttered scones,
All the tomatoes I could pick and eat.

But the poem is also a mystery. In the first stanza, Dunn mentions a tramp he knew. This is the same tramp whose hideout he describes in the third stanza, but there is no explanation of how he actually got to know the tramp, or how he came to see the map of Scotland that the tramp had made, showing safe places to sleep – “folded neatly, And kept inside a dog-eared Robert Burns”. By the mention of Burns, the tramp’s wanderings become romanticised.

This collection has a roundedness that reflects the poet’s great skill in crafting thoughtful poems which evoke a stage in a life of much achievement. But it also reflects the poet’s often painful journey through life; facing up to bereavement, ageing and watching a new generation of adults inhabit – and inherit – the world around him.