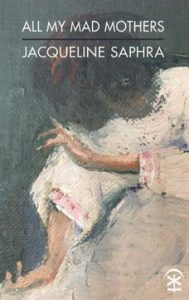 As its title suggests, Jacqueline Saphra’s latest collection, All My Mad Mothers, is about women and family. Saphra’s poems examine the multifaceted nature of  femininity, individual and universal, moving within, between and beyond the roles designated to women. This applies particularly to familial roles she inhabits – mother, daughter, stepdaughter –  but also examined is the woman as guardian, friend, witch and – the other half of the title – madwoman.

The collection grabs us from the beginning with the short and intense “In the Winter of 1962 My Mother…”. This is written in free verse – a paragraph made up of a single, sparsely punctuated sentence that carries with it a sense of panic and lack of control – as the persona’s mother appears tries to run from her life:

until she found herself on Hyde Park Corner
traveling round and round in shrinking circles
not sure how to execute the move outwards
into another lane never having been
properly taught how to make an exit.

Here we have a woman trying to escape not the role of motherhood (she carries her infant daughter as she flees), but rather seeking “another lane”, another life as it were, for her and her child. All throughout the collection, the bond between parent and child is emphasised. Though the first poem is raw and gripping, other poems address this relationship more tenderly, like “When I think of you”, a mantra dedicated to Saphra’s son, reminiscing his childhood. It is a simple list poem which is nevertheless imbued with a feeling of intimacy and longing, with its references to old arguments about the practicality of shoes  that no doubt recall for us similar, past discussions with our own mothers (or children):

pot luck suppers, names of vegan beers,
long-abandoned toys in cardboard boxes,
blinks and sighs you think will hide the tears,
of piercings, partings, oceans still to cross,
protests (yours and mine), guitars, tattoos,
my weary age, your optimistic youth,
the way that water soaks through canvas shoes.

All My Mad Mothers is also a journey through time divided into four sections with shifting perspectives, from recalling childhood memories, particularly about one’s mother, to adolescence, to a mother speaking to her children, partners and the world. This allows Saphra to explore moments when the role of mother and guardian is taken up by others, for example, in “My Friend Juliet’s Icelandic Lover”, where an adolescent persona becomes her friend’s “chaperone” only for events to swiftly move beyond her control:

and still I stayed because you asked me to.
I even forgave you
after I went home to London for a fortnight
because of the pneumonia,
and came back to find you

topless, glowing, perched
on that blue, blue glacier wide enough
to span the narrow hall,
and the flat filled with the smell of him[.]

Saphra intersperses poems with short, untitled prose passages of her own family growing up, shifting the exploration of women and familial roles from the universal to the personal. Here, the writing takes on a quietly confessional tone, describing memories and paying tribute to all the mad mothers she’s known throughout her life.

The topic of motherhood is enduringly popular in feminist poetry. Saphra’s collection calls to mind poems like Carol Ann Duffy’s “Before You Were Mine”; these are honest explorations into the love one feels as a mother, but also the sense of entrapment in such a role –  such “helpless love”, as Saphra puts it, can bring. All My Mad Mothers approaches its subject matter from both perspectives, with tones ranging from the disturbing to the delicate, bolstered by the inclusion of the poet’s own experiences.