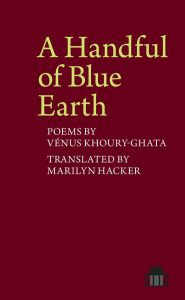 Such wounds, remembered even after the page turns and the book ends up on the shelf, are so common in Khoury-Ghata’s work that they shape their own reality, giving the readers a new set of eyes. These eyes no longer distinguish boundaries, the good blends with the bad; words like desire, youth, loss are deprived of their familiar definitions.

A Handful of Blue Earth is a collection of poems from two of Vénus Khoury-Ghata’s recent books (Le Livre des suppliques and La Dame de Syros), translated from French by Marilyn Hacker, a prolific American poet herself. The author, born and raised in Lebanon, currently lives in France. She’s a renowned author of 22 novels and 18 poetry collections while also translating contemporary Arabic poetry.

The slim volume consists of three sequences of poems and although taken from different books, they appear like one carefully crafted piece. Each sequence brings an independent story, but what they all share is the presence of death. This shouldn’t come as a surprise – after all, it’s one of the most recycled themes in literature – but the way it exists in Khoury-Ghata’s poems is unique. The world of the living merges with the world of the dead, creating a space that’s frightening, but strangely familiar – a place with a different kind of order:

Nature becomes an inherent element of this new place – sometimes taking part in the mourning:

and sometimes suffering the wounds of the guilty as in the poem in which, after killing a girl,

The first two sequences deal specifically with the feeling of loss. There’s a story of a Cycladic statue of the lady of Syros – an image of a girl who was left to search for her dead brother and a heart-breaking succession of direct poems addressed to a lost man.

The last sequence is a universal account of war, where the once innocent children become snipers without ever forgetting that childhood – killers being human and then killing regular people on the same page, abandoning the nature, but craving it in the same breath. Reading this sequence of 23 short poems, none of them titled (as if the identities were lost and forgotten, buried under the dead habitants of each story) is a brutal experience; what might seem a light-hearted moment only brings more grief. For how is it possible that a sniper’s “laughter splattered the blood of the sunset” only to contrast dramatically when:

Death defies the concept of time (“it was yesterday it was very long ago” (“IV”)), manipulates the landscape (“seen from afar, Syros looked like a chessboard / white and black” (“V”)) and the way we perceive the world (“what seemed to be a diamond is salt / petrified between two eyelashes”). “The bones’ dry buzzing in the cemetery” (“X”) covers up the “silence chipped away by use” – all that’s left for the living.

We’re given nothing more than a handful of blue earth, but that’s enough – a reminder that there’s as much death in life, as life in death.