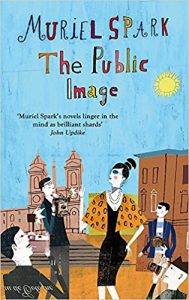 Annabel was entirely aware of the image-making process in every phase. She did not expect this personal image to last long in the public mind, for she intended to play other parts than that of the suppressed tiger, now that she was becoming an established star.

Muriel Spark’s The Public Image was shortlisted for the Man Booker Prize in 1969 and it is easy to see why. As a piece of prose, Spark’s novella is rich in imagery, irony and wit. It is not, however, rich in plot. For those seeking an action-packed page-turner, look elsewhere. This is a book you must persevere with, for it is full of hidden gems. In this cautionary tale of fame and identity, it is Annabel – Spark’s protagonist – that is the star of the show, in more ways than one. She is what every great character should be: complex, flawed, at times a little grating, yet unobtrusive and admirable. As an actress, Annabel’s daily existence revolves around cultivating her “public image”, a phrase that is iterated throughout the novel like a personal mantra, sometimes cropping up two or three times in a single sentence. The first three chapters establish this “public image”, in which Annabel and her husband Frederick pose as contented sophisticates living in Italy, and happy parents to Carl, most often referred to as “the baby”.

Behind closed doors, however, it is an entirely different story. Spark uses these chapters to set up the primary conflict – Frederick’s misogynistic inner turmoil, arrogance and all-round villainy.  Here, whole paragraphs are dedicated to Frederick’s loathing for his wife’s success. It quickly becomes apparent that he does not belong in her superficial world, which might prompt us to pity him, if not for Spark’s brilliant turn of phrase:

By the time he was twenty-nine years of age his undoubted talent had been tested only a few times in small productions and then no more. His mind took the inward turns of a spiral staircase, viewing from every altitude and point of contortion the unblemished, untried, fact of his talent. In reality Frederick was an untrained intellectual.

It is clear that while Spark is by no means glorifying the celebrity sphere, she is not condemning it either. In fact, from chapter three onwards, Fredrick’s actions attempt to tarnish Annabel’s image, effectively ruining her career, and force us to consider both sides.

Many characters, like the sleazy director, Luigi, enter and leave the narrative as caricatures: stereotypes straight out of film culture.  This serves to remind us that all reputation is a kind of fiction. There is a frivolousness to Annabel that, at times, adds to this fiction – we might frame her as an Elizabeth Taylor-type. Yet, as soon as Spark has us shaking our heads and smirking at the ridiculousness of it all, she drops in the serious matter of maternal love:

The baby, Carl, was the only reality of her life. His existence gave her a sense of being permanently secured to the world which she had not experienced since her own childhood had passed . . . She felt a curious fear of display where the baby was concerned, as if this deep and complete satisfaction might be disfigured or melted away by some public image.

In spite of this, “the baby” is for the most part an accessory to Annabel and her husband, regularly attended to by nurses and neighbours.  Although, as this suggests, the novella is full of contradictions, Spark knew exactly what she was doing. The Public Image captures a few months of a young star’s life without making her an attention-grabbing brat or a victim of fame. Simply, this is a book about stardom without the usual clichés; even if you are looking for a fresher perspective, Spark’s timeless prose will win you over.