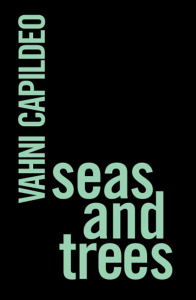 Do you remember when you were learning to read and it was both difficult and exciting to mouth the next word? Then there’s the thrill of recognition. The simple rhyming title of Vahni Capildeo’s chapbook seas and trees – presented in lowercase sans serif typeface – may take the reader back to those days.

One might also wonder – what else can there possibly be left to say about seas and trees? The surprising flamboyance of these poems is announced at the outset:

That trees had evolved to eat other trees.
That this happened at the end of a garden.
That this was first noticed in a small tree’s wincing.
(“Framboyán”)

Capildeo depicts the creaturely behaviour of Framboyán trees in her childhood garden in Trinidad, as they are “whipped by no wind” and one of them is “bunched to a beak”. As the poem progresses, the effect is neither childlike nor menacing, neither uncanny nor surreal – it is eidetic, vividly experienced. This is one of the admirable aspects of Capildeo’s poetry; it brings convincing, vibrant interpretations of the nature of things.

Capildeo is a Trinidadian British writer and the chapbook Seas and Trees appears after the success of her 2016 collection Measures of Expatriation which won the Forward Poetry Prize. She has worked as a lexicographer at the Oxford English Dictionary and has a DPhil in Old Norse and translation theory. She is an experienced writer across many genres and her poetry is intelligent and assured. Capildeo negotiates language as if edging around precipices, along causeways and horizons; she is comfortable with uncertainty and rapid shifts of perspective –

A looked-for line between wet sky and water
Seams non-existence[.]
(“Inishbofin: I”)

Her use of syntax is striking. It is as if each poem operates on the basis of a unique internal linguistic logic, as though Capiledo is conducting a thought experiment, pursued to its conclusion. In several of the poems, she uses the variable of colour as a fixed position from which to explore – the violet of early morning in “From A Book of Hours: From Aidoneus to Zeus 06.25h.” (“Since there has been no other colour but violet, is that/ what to call the mist that neither rises or folds above the flood/ meadow?”) and the red peel from an apple in “Call it simple: Two Exteriors, II.” In the latter example, the words and sounds are given licence to operate in a fluid way, resulting in a break-neck reasoning, though not without humour:

red   made to demonstrate
the blade’s wielder’s no waste-maker,
red
chivvied to resembling infinity,
red
shying towards identity with ribbon
as if not meant for more than shredding.

Despite the simple language of the collection title, Capildeo makes the titles of some poems work hard. Examples include “For Adjectives are one Road Cut into the Precipice Bordering Perfection”; “Opalescent, Crystalline, Amethyst. And Dark”; “After a Hymn to Aphrodite/ 1. That Voice Revises Several Languages”. Other titles are more colloquial – “Completely F****d”, although, unexpectedly, this poem is inspired by the literary source of Montague Summers’s Translation of the Malleus Maleficarum, a fifteenth century witch-hunting handbook. Throughout the chapbook, Capildeo’s recurrent themes of identity, heredity and existence are explored from unusual perspectives.

The most memorable poem in seas and trees may well be “Tree with a Silver Lining”, dedicated “i.m. the nuclear dead”. Capildeo approaches the subject of nuclear warfare via the motif of the nuclear shadows of leaves – permanent imprints left on a surface that has been bleached by heat radiation. The final words of this poem resonate as if to dispel the inhumanity of war and the fear of death – words as protective devices to be mouthed aloud –

do not leave believing bereavement, who can stay?