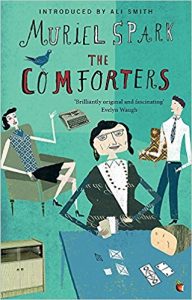 I use “mad” of course in the colloquial sense. In the way that we’re all mad, you know. A little crazy, you know. Amongst ourselves, I mean – the intelligentsia are all a little mad and, my dear Caroline, that’s what makes us so nice. The sane are not worth noticing.

It may not be too far-fetched to claim that all writers are a little sadistic. The ability to plunge characters into torturous situations is perhaps one of the most entertaining aspects of fiction writing. Muriel Spark’s debut novel The Comforters, first published in 1957, plays upon this practice in wonderful ways.  The protagonist, (used in the loosest sense of the word) Caroline Rose, spends the majority of the novel being tortured by the clattering of typewriters, and the disembodied voice of an author who can apparently read her thoughts. This was inspired by Spark’s experiences with Dexedrine, a diet pill that caused her to suffer hallucinations, and which made it almost impossible for her to read, as the words before her seemed to move around the page. At times, Caroline’s delusions are chilling, preying upon our natural fear of the feeling of being watched when we think we are alone. However, we also see Spark’s trademark “glittering wit” shining through the mystery and the ambiguity.

One example of this is when the narrator addresses the reader directly to explain that the book that they are reading is, in fact, a work of fiction: “At this point in the narrative, it might be as well to state that the characters of this novel are all fictitious, and do not refer to any living persons whatsoever”.  In any other novel, such explanations could be criticised for pulling the reader out of the narrative, reminding them that they are simply reading a book. But Spark manages to pull us even deeper into the story with this moment of manipulative humour, possibly even eliciting a chuckle from fellow writers who may be reading. The Comforters is crammed full of these moments of meta humour, and jarringly fun references to writing and authorship that are so on-the-nose that they might as well be accompanied by a “See what I did there?” in parentheses.

Caroline is working on a book entitled Form in the Modern Novel, but she is “having trouble with the chapter on realism”. Her ex-lover Laurence writes her a letter, narrating what his grandmother is doing, generating narration within narration. The novel’s ending reveals the entire book to be yet another layer of storytelling in this narrative that continuously twists and builds upon itself with the use of satire and trickery. This is a work that is fundamentally about the act of writing, written by a former literary critic.

It is hard to pin down exactly what The Comforters is trying to be. The novel is split into two parts, with Part Two exploring the mystery surrounding Laurence’s feisty grandmother and her diamond-smuggling gang. This subplot is the only aspect of the book that attempts to remain grounded in reality, but even this is not immune to moments of madness. Interjections of conversations between Caroline and the eccentric Baron Stock remind us that the absurd nature of the novel does not begin and end with the storylines. Nobody is entirely sane in this book. Spark’s characters are stuck somewhere “between sanity and madness”, questioning their state of mind (“Is the world a lunatic asylum then?”) and indeed their very existence. These issues, like many others in this novel that sits somewhere between a straightforward mystery novel and a drug trip, are never fully resolved, and as readers, we are simply left to decide for ourselves.