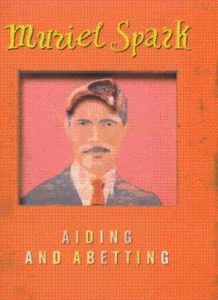 “Do not lose hold of the name Hildegard Wolf,” warns narrator and renowned author Muriel Spark as she twists legend into a tale of stolen and recreated identities. With these words, Spark adeptly begins to deconstruct the relationship between detective and criminal in conventional murder mysteries. With its cast of unorthodox characters, Aiding and Abetting challenges readers’ expectations of what constitutes a suspect and villain.

Shortly after its publication in 2000, the Guardian review commented: “If Aiding and Abetting has a theme, it is that sympathy is both relative and unpredictable: in other words, when monsters are cornered, their charisma begins to work overtime and we may not find ourselves invulnerable to their charms.”  Not only do Spark’s characters intrigue readers with their idiosyncrasies and complex, intermingling histories, but they also invite sympathy; they ask to be held accountable for their sins. Despite the fact that Spark’s villains seek consolation, none of them appear to be sincerely repentant. Additionally, as the narrative unfolds, readers find themselves justifying unpardonable wrongs when faced with the notion that no one is truly blameless.

Aiding and Abetting is a reworking of the Lord Lucan affair—a legend that centres around the disappearance of an Anglo-Irish aristocrat suspect of murdering the nanny of his three children. In her novel, Spark recreates the character of Lord Lucan twice. The first, “Lucky Lucan,” begins therapeutic sessions with the renowned psychiatrist Dr. Wolf to appease his conscience. “Twenty-five years ago I sold my soul to the Devil,” he says. The second, Walter, “the name by which her other Lucan patient asked to be called,” books his appointment with the psychiatrist with ill intentions. Spark’s female therapist examines the characteristics of these two men in depth, in order to discern between Lord Lucan and the fraud, however, Dr. Wolf is not simply nonconformist in her practice, but rather, a practiced charlatan herself as well.

The story is propelled into action after Walker blackmails Hildegard with knowledge of her past; a criminal life spurred from poverty in which she was Beate Pappenheim, the famous fake stigmatic of Munich. Aiding and Abetting relies on Spark’s own investigative journalism into this historical legend, and it finds its way into the hands of protagonist Hildegard Wolf who takes the case of the Lucans in order to exempt herself from their threats. Ironically, it is Hildegard Wolf, a fraud herself, who acts as detective in pursuit of discovering the fraud between two plausible suspects.

Besides Dr. Wolf and the two “Lucans,” a cast of characters acts as detectives on the hunt for truths about the auspicious legend, some of which include Jean-Pierre Roget, Hildegard’s “companion-in-life,” Lacy Twickenham, and Dr. Joseph Murray. While none of these characters solve the case themselves, the clues they encounter enable the reader to piece together the puzzle and make assumptions as to who exactly should be accused of committing murder on that sinister night in November 1974.

Despite the fact that the recurrent motif of blood in the novel feels overwrought, Spark brilliantly speaks to the humanity of readers. By focusing on Walker’s persecution and crude temperament, she encourages readers to find themselves sympathising with murderer “Lucky” and fraudster Hildegard. She then leaves them to unravel this inverted sense of right, wrong, and justified.  Aiding and Abetting is indeed a strangely gripping short novel as it subverts expectations around the true-crime case of a twentieth century murderer and all those who aided and abetted the consequence of his actions. Aiding and Abetting is a work that truly speaks to Muriel Spark’s satirical wit and creative power.