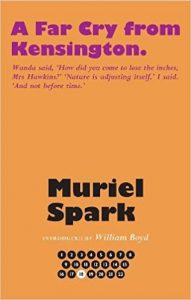 As someone whose only prior dealings with the works of Muriel Spark came from a forced reading of The Prime of Miss Jean Brodie many years ago, I was far from sure that I was going to like A Far Cry from Kensington. However, the book came as a pleasant surprise.

The story follows the character of the overweight Mrs Hawkins through her life as a young woman working and living in Kensington.  It’s narrated in past tense by Mrs Hawkins, who tells us early on that she is going to go through a great deal of change.  Speaking from a point thirty years after the story is set, there are regular hints in her narration that she has changed not only in size but in the way others perceive her:

Although I was a young woman of twenty-eight I was generally known as Mrs Hawkins […] There was something about me, Mrs Hawkins, that invited confidences […] It was not till    later, when I decided to be thin, that right away I noticed that people didn’t confide their thoughts to me so much.

The story is meandering, with numerous characters coming and going as our narrator moves through her life, and through various different jobs, but we’re given a sense of consistency as most of the action in the novel revolves around the people who were contemporaneous with Mrs Hawkins at the boarding house.  At first, these characters come across as rather one dimensional, with the narrator listing them all initially and giving only basic details about them.  However, as the story unfolds, we’re given more information about these characters, their secrets revealed to show how they really live their lives behind closed doors, and they become more complex and developed—although not always more likeable.

The pacing of A Far Cry from Kensington is, in the main, fast and thoroughly entertaining.  We move quickly from one scene to another, through different characters and times, making the novel easy to read in one sitting.  I suspect that this fast pacing is at least in part due to the manner in which Spark wrote, famously thinking about her novel for a long time, but actually penning the novel in the space of only a few weeks, with little (if any) revisions.  Spark explained her methods in the BBC Documentary The Many Primes of Muriel Spark:

I write the title, then I write my name […], I write Chapter One and then I write on.  I leave a  space so that I can make alterations as I go along, but I don’t revise it afterwards.  Then it    goes to the typist, and she types it, then I revise that, and that’s the book.  That’s finished.

Whilst this goes against the expected methods of writing—where we might imagine a writer slaving away for years to ensure their masterpiece is edited to perfection—it’s a refreshingly fun way to go about the task of writing a novel.  This sense of fun comes across in the wry, sometimes dark humour that shows up throughout the book, such as when Isobel discovers her unwanted pregnancy, and adoption is suggested to her: “I don’t see why I should go to a lot of trouble and then having nothing to show for it.”

Disappointingly, in spite of the vast majority of the novel being paced perfectly, with the action unfurling rapidly, the last few chapters—when our narrator has moved out of the boarding house— feel a little bit like a clumsy extension, an add-on which doesn’t add much.  However, these last chapters do tie up some loose ends, and without them some questions left unanswered, so their slower pace can be forgiven.  Overall, I was thoroughly entertained by A Far Cry from Kensington, and left with a sense that I should perhaps give The Prime of Miss Jean Brodie another chance.